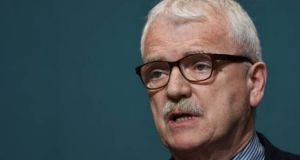 Minister of State for Disability Issues Finian McGrath: he is said to be “50-50” about running again

After lengthy talks on the potential formation of a new minority government in 2016, Fine Gael TD Noel Rock stood up to nominate Enda Kenny for the position of taoiseach for the fourth time. All eyes were on the door, however, as politicians waited impatiently to see if the recently-formed Independent Alliance was on board.

Just before the end of more than two hours of debate, Independent Alliance TDs arrived into the chamber, and Finian McGrath, to the amusement of many, beamed and played air guitar in the direction of the government benches. The game was afoot at last.

Four years later it would appear the Independent Alliance as we know it has come to an end. While the imminent general election may have yielded the same result, the apparent demise of the group was hastened on Monday by the decision of Kevin “Boxer” Moran, Minister of State for the OPW, to run as an Independent candidate away from the Alliance banner.

Despite all the relatively normal squabbling that comes with being part of a political group, the members managed to hold together well enough until this point notwithstanding the exit of Sean Canney in 2018.

Mr Canney took his decision after losing a row over the allocation of a junior ministerial portfolio, a disagreement which originated in a coin toss between Moran and Canney over who would take the job first and how long they would hold it for.

There were other external rows too on health issues such as the establishment of a second cath (catheterisation) lab in Waterford.

And there were complications when members of the Independent Alliance said they wanted to support an Opposition private member’s motion on abortion, which in turn led to a terse debate on the concept of collective Cabinet responsibility.

There were more angry exchanges when some of the group felt they had been left open to ridicule after a peace trip proposed by some of its members to North Korea.

And yet still the Alliance remained in Government.

The role of the grouping in any future coalition has been thrown into sharp focus following Mr Moran’s public comments. Speaking in an old ammunition bunker at the magazine fort in the Phoenix Park, Mr Moran appeared to try and soften the blow by saying that he could very well rejoin the Independent Alliance should the various members be re-elected.

He then said: “If it is not the Alliance and is another alliance, so be it.”

There were suggestions that the Minister for Transport, Shane Ross, in particular was taken aback by his statements.

What will further compound the situation this week will be an expected announcement from Minister of State for Training and Skills John Halligan about his own future in politics, with speculation that he may not run for election again.

Meanwhile, Minister of State for Disability Issues Finian McGrath is also said to be “50-50” about running again.

With the role of Independent candidates likely to be one of the more interesting features of this election, and should Ross continue with the project, the Independent Alliance as we know it could have a very different look once the dust has settled.