Varadkar warns of consequences if wages grow too fast in 2018 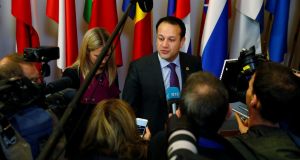 Leo Varadkar in Brussels earlier this month. The Taoiseach has said there is a risk tax giveaways and substantially increased public investment in the economy could repeat the “mistakes of the past”. Photograph: Phil Noble/Reuters

The Government is concerned that wages will grow too fast next year, damaging Ireland’s competitiveness and undermining future economic growth, Taoiseach Leo Varadkar has warned.

Mr Varadkar also said that if economic growth continued at its present strong rate, the Government would consider holding back some spare cash in the budget and not spending it for fear of overheating the economy.

Speaking to journalists in a pre-Christmas interview, Mr Varadkar that there was a risk that tax giveaways and substantially increased public investment in the economy could repeat the “mistakes of the past” and that the Government would have to balance competing priorities when it came to frame next year’s budget.

His words were echoed by Minister for Finance Paschal Donohoe who told The Irish Times in an interview that the Government’s goal was steady economic growth, rather than the unsustainably high growth rates, accompanied by huge spending growth, of the past.

Economic think tank the ESRI and independent budget watchdog the Fiscal Advisory Council, as well as many individual economists, have all warned of the dangers of overheating in the strongly growing Irish economy in recent months.

“If the economy continues to grow at the rate it is growing now I think we would have to consider not spending all of the resources available to us,” Mr Varadkar warned.

“There is a risk, as is always the case for a growing economy with low unemployment, of repeating the mistakes of the past and actually making government decisions that could overheat the economy,” he said.

“We know that if we increase capital spending too quickly, even though we all want more hospitals, schools and houses, all you do is drive construction inflation and you end up getting the same number of schools but you pay more.

“We also know that there are risks, in terms of competitiveness, if we let pay grow too fast and potentially becoming less attractive to employment into the future. We are going to have to balance those things,” he said.

“But we will have to give consideration when we are heading into the budget – just because there is a certain amount we can use, would it be prudent to do that? Maybe the kind of things we should be looking at are more around reform, partially around pensions, so perhaps putting some money aside for the future pension liabilities that are definitely going to arise.”

Mr Varadkar said the Government will construct next year’s budget with the emphasis on “services and infrastructure with the lesser part, a third or less, going to tax reductions and tax relief, particularly for middle-income earners”.

He said the Government would be able to afford to cut USC and income tax again next year, but suggested that it might not.

“As things stand we can afford to do both whether it is prudent to do so is a different question,” he said.

While the Government was minded to present a similar income tax package as in the October budget, which focused on “that structural tax issue we have in Ireland whereby people on very modest incomes or middle incomes pay the higher rate of tax”, Mr Varadkar indicated, it was “not certain” that the tax cuts would go ahead.

He said the Government’s “first priority for next year is to keep the economy on track and manage the public finances prudently.

“We’ll avoid overheating in the economy and continue to reduce the debt – not just public debt but also observing a reduction in personal and household debt.”