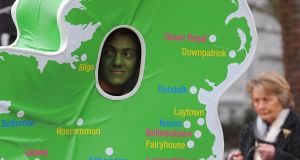 “Oy, get your hands off my Dingle . . .” The man in the map of Ireland costume at Cheltenham in 2012. Photograph: Andrew Yates/Getty Images

The disgusting behaviour of business big wheels at a lavish charity fundraiser in London’s five-star Dorchester Hotel was big news this week.

The men-only dinner was infiltrated by a couple of reporters from the Financial Times who watched Masters of the Universe become Maulers of Universe as the night wore on and the free booze flowed. Young female hostesses – hired to wait on tables and told by their agency to wear black sexy underwear to complement revealing black uniforms – were allegedly sexually harassed by guests, many of whom seemed to view them as part of their freebie list.

When the story broke, it didn’t take long for the depressingly predictable reaction to surface: those girls should have known what they were letting themselves in for (being pawed, propositioned and demeaned) and the clued-in alpha males who did it had no idea that this sort of carry-on could happen at an event like this and, anyway, they saw nothing untoward on the night.

Needless to say, on this side of the water, a race began immediately to find an Irish angle.

This morning, with profound regret, we reveal it.

It involves a young person hired to wear a strange costume and make-up at an event where there are lots of men with drink taken, along with thoroughbred flesh, high-rollers and the glamorous sport of Kings.

Our profound regret is that while the story is about Irish racing, it isn’t in the least bit racy.

Having combed the client list of the agency which provided the hostesses for that now-infamous Presidents Club dinner in the Dorchester last week, two interesting names jumped out: Horse Racing Ireland and Tourism Ireland.

You can imagine our excitement.

The company was paid a total of €1,500 for its services between 2011 and 2014 and provided “one male promotional personnel” to wear a “map of Ireland costume” to promote racing in Ireland.

“There are currently no plans to use outside agencies for promotional activity for the Cheltenham Festival,” a spokeswoman for HRI said when asked if the agency would be used again in light of the Presidents Club controversy.

And where Tourism Ireland is concerned, it considered doing some work with Arista in 2010 for an outdoor event in the Midlands, as part of a St Patrick’s Day programme of promotions in Britain. In the end, they decided not to go ahead with it.

A spokesperson says Tourism Ireland will contact the company to request its removal from the client section of their website.

Judge Peter Charleton is very keen to bring his tribunal in on time. He’s probably worried that the curse of King George’s Hall – where the Moriarty Tribunal ran for what seemed like 100 years – will strike if he doesn’t keep an eye on the calendar and the clock.

He doesn’t want matters to slide, so every now and then, he interjects with a comment on the need to keep business ticking along at a steady clip. The Chairman of the Disclosures Tribunal likes to find different ways of saying this, as regulars are discovering.

Here he is on Wednesday:

“Okay, it’s 2:30 and it’s day 47, and I am not sure that this particular module is anything less than important – of course it is important, but there are more important matters ahead, which I would love to get to prior to the longest day of the year. And so, as a coloratura foghorn wailing in the wind, which is what I feel myself to be at times, I wonder could we now move on? Thank you.”

A coloratura foghorn? Wailing in the wind?

First we take Europe, then we take Cavan-Monaghan

Congratulations to Senator Joe O’Reilly who was elected as one of the vice presidents of the Council of Europe on Monday.

The Taoiseach was first out of the traps to send best wishes to his “Cavan-Monaghan Senator”, even though he will be aware that senators do not represent constituencies. Leo nominated Joe for the job.

Joe, understandably, is delighted with his new position and says he will engage with colleagues from the other 46 member states to tackle issues of mutual concern, along with ensuring Ireland’s interests are represented and understood.

“I will continue to work to ensure the concerns of the Border region are heard, and acted upon, in the Brexit process, both as the Fine Gael Senator for Cavan- Monaghan and now as a vice-president of the Council of Europe Parliamentary Assembly. ”

Joe points out – in a press release which we hope found its way safely to the local media – that his new role affords him “a great opportunity to represent and strengthen our communities in Cavan and Monaghan and, of course, our entire country at a time when the international challenges facing Ireland are so profound.”

Not to mention the domestic challenges facing Fine Gael in Cavan-Monaghan, which are also profound. Heather Humphreys took the party’s only seat at the last election, with Cavan-based TD Joe losing out. The constituency goes from a four- to a five-seater next time out.

Fine Gael is banking on Joe O’Reilly to bag that extra seat and return to the Dáil.

So while senators may not represent constituencies and are not described as such, the new vice president of the European Council will also be a “Cavan-Monaghan senator” from now until the next general election.

Leo detains the ladies to get their views on abortion

As he continues reading himself into what he should do about abortion and consulting with colleagues on the matter, Leo Varadkar is expected to indicate his position to the Dáil next week.

Not before time, say his critics.

On Tuesday morning, Fine Gael TDs and Senators received an email followed by a text from the Taoiseach asking them to meet him in the afternoon in his office in Government Buildings to talk about the proposed referendum to repeal the Eighth Amendment to the Constitution. Some were surprised when they arrived to find that Leo had only invited the female members of his parliamentary party.

The Taoiseach told them he wanted to hear the views of women TDs and senators on their own, because abortion is something which uniquely concerns them. “I think it was a nice thing for him to do, considering that it’s women who get pregnant and who have to make these decisions. I think some of us feel a bit awkward or even annoyed sometimes when the men are banging on about it,” said one TD afterwards.

Apart from some Ministers who were detained on business, there was a full turnout and almost all of them spoke. The meeting lasted over an hour and there was “100 per cent consensus repeal of the eighth.”

One TD spoke of her deep Catholic faith and how she is very conflicted by the evolving debate. She was reassured by the Taoiseach and her colleagues. TDs and Senators who were around when the last government introduced the Protection of Life During Pregnancy Bill spoke of how they had felt intimidated and pressured during its stormy passage, with one saying she thought she’d have to go for counselling after it.

For the most part, Leo let the women do the talking. At one point, he asked if they thought he was delaying too long in disclosing what stance he intends to take on the issue.

While the consensus was in favour of repeal, opinion varied on what course of action to take after that. One of the women wondered if it might be better to limit access to abortion to 10 weeks, as opposed to the currently mooted 12 weeks.

An upshot of the meeting was that the FG women were late for a meeting of the recently formed Oireachtas women’s caucus. Couldn’t be helped.

No sniggering idiots in this House, thank you very much

Independent TD Michael Collins, who is part of the Dáil’s rural independents group which includes Mattie McGrath and the Healy-Rae brothers, was involved in an interesting spat in the Dáil canteen on Wednesday morning.

He approached Aodhán Ó Ríordáin and was overheard asking him if he was a Labour senator and if he could have a word. Shortly afterwards, Ó Ríordáin, who was having coffee at a nearby table, went over to speak to Collins.

The Cork South West deputy showed the Senator a news report from December’s Irish Examiner which he had saved to his mobile phone. It referred to a news briefing on the plinth when Mattie McGrath, commenting on the imminent report of the abortion committee, remarked, “the fat lady hasn’t sang yet,” then added, “and I’m not talking about the chairperson or anything like that.”

Collins and Danny Healy-Rae, who were standing behind the Tipperary TD at the time, could be seen chuckling. McGrath’s words were immediately reported and a video clip went online. Despite ringing committee chair Catherine Noone within 30 minutes to apologise, he was heavily criticised on social media and by TDs and Senators.

The Examiner report included a strongly worded tweet from Labour senator Ged Nash. “Don’t dismiss this as buffoonery from a gobshite who, far too often, gets a fool’s pardon . . . This reveals precisely what he and his support act of sniggering idiots really think of women. End of story,” he posted.

His colleague Ó Ríordáin weighed in against McGrath, in a tweet which began: “What a disgusting, degrading comment . . .” There was no mention of the support act.

Clearly, Michael Collins had been thinking about these tweets – they were among a number from across the political spectrum – over the Christmas break.

The canteen exchange carried on towards the door as Collins continued to remonstrate with Ó Ríordáin. Voices were raised. “I’m not a sniggering idiot,” he was heard to protest, while taking the senator to task for Labour’s policy on abortion.

Clearly very annoyed, Collins declared he will be raising the matter in the Dáil.

“I only came in for a coffee and a bun,” said Ó Ríordáin, when the storm subsided.