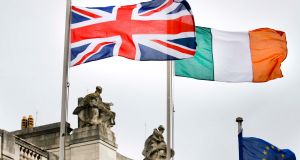 A spokesman for the Department of Foreign Affairs said that it was “the lead department on Brexit but across all the departments work is being done so that Ireland is prepared for all scenarios”. Photograph: Brian O’Leary/RollingNews.ie

Government departments have been asked to provide contingency plans, including possible emergency legislation, in the event that the EU and UK do not conclude a deal on Brexit.

The plans are being sought to prepare for a worst-case scenario ahead of the start of the second-phase of negotiations between London and Brussels on the UK’s withdrawal from the EU in March 2019.

Each departments has been asked to consider the potential cost of a hard Brexit and likely resources, policy responses and legislation – either domestic or at EU level – required should there be a disorderly Brexit.

The planning, which is being co-ordinated by the Department of Foreign Affairs, is part of Government efforts to prepare for Brexit and will be used to feed into broader budgetary and legislative preparations.

Detailed responses will start being provided by Government departments next week and over the coming weeks. These will be used to plan for a worst-case Brexit where no agreement is reached between the UK and EU to deal with contingencies such as the sudden imposition of high international tariffs, customs posts along the Border and at Irish ports and significant disruptions in trade.

The aim of the planning is to prepare for a “baseline” scenario around a disorderly Brexit and to work back from that, preparing for more favourable outcomes such as the UK retaining links to the EU customs union, a Norway-type option with access to the single market or a EU-UK free-trade agreement.

A spokesman for the Department of Foreign Affairs said that it was “the lead department on Brexit but across all the departments work is being done so that Ireland is prepared for all scenarios”.

The Department of Finance and the Government think tank, the Economic and Social Research Institute, has warned that a hard Brexit could cost 40,000 Irish jobs and add €20 billion to the national debt given the heavy trade in goods and services, amounting to €1.2 billion a week, between Ireland and the UK.

Taoiseach Leo Varadkar said in Davos this week that he would like to see a specific “Norway-plus” agreement reached for the UK that would be closer to the non-member Nordic country but which would have to be a specific agreement because there was no precedent for the relationship.

Minister for European Affairs Helen McEntee will attend a key meeting of the EU’s General Affairs Council on Monday that will finalise the mandate of EU Brexit negotiator Michel Barnier for the next phase of negotiations. This will be followed by talks between officials on the post-Brexit transition period.

The UK’s Brexit Secretary David Davis has said London would like to maintain existing international agreements, including trade deals, for an “implementation period” after the UK leaves the EU.

Talks will continue through next month with a view to intensifying negotiations on a withdrawal deal so as to prepare trade guidelines to be agreed at a key European Council summit on March 22nd-23rd.

Carbon emissions in Ireland ‘to drop 9.5% this year’ due to coronavirus slowdown