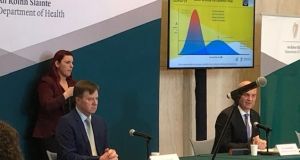 The number of people who have died from Covid-19 in Ireland has almost reached the 100 mark.

A further 402 new confirmed cases of Covid-19 in Ireland as of lunchtime on Thursday bring the total figure to 3,849.

Chief Medical Officer Dr Tony Holohan said we are not yet on course to avoid a potential situation in which the number of people requiring intensive care outstrips available beds.

“If we keep growing at the rate we are growing we won’t avoid that scenario so we need to keep improving,” he said.

“There are two ways in which we do that; one is to keep improving and trying to suppress and drive down the rate of growth of this epidemic, hopefully we get it down to zero because that’s the point at which we hit the peak and it starts to drop. We are not at zero, we are at about 10 per cent at this point in time.”

As regards the surge, Dr Holohan said the initial daily increase in cases was at a rate of 33 per cent but that restrictions, and public adherence to them, had reduced this by at least half.

“We think it might be as low as 10 per cent in terms of growth so we are seeing continued improvement in terms of that...which is giving us clear evidence that we have flattened the curve but we need to flatten it further and over the next week or so in particular we will see the full impact of the measures.”

Of the most recent deaths, nine were located in the east of the country, one in the south and three in the west. There were nine men and four women with a median age of 82 - 10 had underlying conditions.

Dr Holohan, who has returned to duty following a brief illness, said that of 148 cases admitted to Intensive Care Units (ICU), 25 have been discharged.

“I would also like to highlight a worrying scene I witnessed during my visit to hospital on Tuesday evening; empty waiting rooms and empty beds.

“While protecting yourself from Covid-19 is a priority, no one should ignore signs that they may need medical attention for other ailments such as lumps, chest pain or other concerns. Please do not ignore any symptom outside of Covid-19. The hospitals are there for all ailments, not just Covid-19.”

To date,932 cases (28 per cent of the total) have been hospitalised. Of the 98 deaths, 68 were men, 30 were women and 85 per cent were over the age of 70. Underlying health conditions were present in 80 per cent of those fatal cases.

1 With Lincoln looking on, the crowd dropped to their knees as 7pm approached
2 Luke ‘Ming’ Flanagan bares his bottom half to European Parliament
3 Coronavirus: 25% of new cases arising in the community with no know link to other cases
4 Easing restrictions: What exactly will happen next Monday?
5 George Floyd: US protesters defy curfew as demonstrations over killing rage on
Real news has value SUBSCRIBE