Brexit: Taoiseach ‘not entirely clear what exactly is being sought’ by UK government 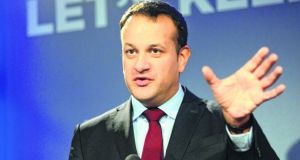 Taoiseach Leo Varadkar has called on the British Government to clarify if it intends to remain in the customs union in the aftermath of Brexit.

Sources in Downing Street have ruled out remaining in the customs union after confusion surfaced over British prime minister Theresa May’s intentions.

He said: “What we have in the agreement made in December are some very specific commitments that we will avoid a hard border, any new barriers to trade and the movement of people between Northern Ireland and the rest of Ireland and we can avoid that in one of three ways.

“Either through the new relationship between the UK and the EU, through bespoke plans that the UK are mandated to come up with, or thirdly a unique arrangement with Northern Ireland in which there will be a full and ongoing regulatory alignment.

“We are keen to have that fleshed out now as part of the withdrawal agreement.”

Ms May is facing increasing dissent within her own party as the hard Brexiteers in her party fear she is softening her stance on leaving the European Union.

The leader of the Labour party in Ireland Brendan Howlin says it is time for a general election to be called in the UK.

However, Mr Varadkar declined to be drawn on Mr Howlin’s comments, insisting those were matters for the UK Government.

“What we are working on now is ensuring that what was agreed upon in December is fully reflected in the withdrawal agreement that is being negotiated now and as well as that that there is a transition phase that gives Irish businesses and Irish people, time to adapt to any permanent changes,” he said.

“So there is a lot of work happening behind the scenes and the European Council will meet again towards the end of February to assess progress.”

Asked about a possible customs union on Friday, May refused to rule it out, telling Sky News: “What I want to do is ensure that we have got the best possible trade arrangements with China and with other countries around the world.”

Downing Street has since ruled out involvement in a customs union amid confusion over government policy, as Ms May prepares for a crucial week of talks. An official source said: “It is not our policy to be in the customs union.”

The clarification came on the eve of a visit to Downing Street by the EU’s chief negotiator, Michel Barnier, and as officials in Brussels prepared to begin talks on the transitional arrangements.

Key cabinet colleagues will meet on Wednesday and Thursday to decide the details of the government’s policy regarding a customs union.