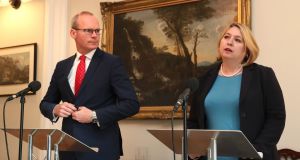 The Minister for Foreign Affairs Simon Coveney and the Northern Secretary Karen Bradley will hold talks with the North’s five main parties at Stormont on Thursday to determine if there is any chance of a political breakthrough in the coming weeks. File photograph: Brian Lawless/PA

The Taoiseach Leo Varadkar and the British prime minister Theresa May, who are reviewing what progress has been made in the talks aimed at restoring Stormont, are likely to urge the Northern parties to make a concerted effort for an early summer deal, according to informed sources.

The Minister for Foreign Affairs Simon Coveney and the Northern Secretary Karen Bradley will hold talks with the North’s five main parties at Stormont on Thursday to determine if there is any chance of a political breakthrough in the coming weeks.

While sources said progress was made in the talks to date, there is still uncertainty in London and Dublin and among the parties over whether there is any realistic chance of an agreement to reinstate the Northern Executive and Assembly before the autumn.

On the negative side the view is that such will be the focus this summer on the Conservative Party selecting a new prime minister to replace Theresa May that the British government will not have the energy or concentration for serious Stormont negotiations.

The contrary argument is that now that Mrs May has no chance of resolving the Brexit problem she may dedicate part of the rest of her limited tenure to getting a deal in Northern Ireland, and seeking to leave something of a positive legacy from her difficult premiership.

After Thursday’s talks, Mr Coveney and Ms Bradley will assess the mood among the parties and then respectively report to Mr Varadkar and Mrs May. Senior sources said the two governments believe some progress was made and that over the weekend the two leaders will urge the parties to continue their negotiations into June.

On Wednesday evening a spokesman for Mr Coveney said “there has been constructive engagement by party leaders and party representatives but this will need to be seriously intensified to rise to the challenge of finding an agreement”.

Meanwhile, more than 200 people from the political, academic, legal, arts and sporting worlds have called on Mr Varadkar and Mrs May to implement an Irish language Act in Northern Ireland.

The letter comes at a time when nationalist demands for movement on the language are one of the key issues in the political talks aimed at restoring powersharing at Stormont.

Their letter, published in the Irish News, urges the “prime minister and An Taoiseach to fully implement without further delay the commitments made in the St Andrews Agreement of 2006 in relation to an Irish language Act”.

The political signatories include Gerry Adams and Michelle O’Neill of Sinn Féin; Colum Eastwood and Patsy McGlone of the SDLP; Northern Green Party leader Claire Bailey and Gerry Carroll of People Before Profit.

Also among the signatories is Linda Ervine, an Irish language development officer in loyalist east Belfast.

“To those who fear that learning the language will somehow change people’s political viewpoint I would state that it has given me a renewed pride in my Presbyterian heritage and made me more aware of the links between Ulster and Scotland, ” said Ms Ervine, a sister-in-law of the late Progressive Unionist Party leader David Ervine.