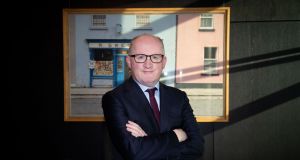 The number of people earning €100,000 or more at the Central Bank increased by almost 30 per cent last year, its annual report shows.

The bank also recorded a profit of almost €3 billion in 2018, with €2.38 billion of this figure set to be returned to the exchequer.

Cental Bank governor Philip Lane, who was presenting the final set of results for the bank before he takes up his new position as chief economist with the European Central Bank, said the increase in the bank’s wage bill was partially down to the cost of attracting people from the private sector to bolster the bank’s capabilities.

“The fact that we do have a lot of people who are appointed at quite a senior level basically reflects the nature of the work that we do,” he said. Since Mr Lane took up his position as governor of the Central Bank in 2015, headcount at the bank has increased by roughly one-third, he said.

“After that period of considerable expansion, we are entering a phase of considerable consolidation,” he said. “I don’t expect [an increased pace of hiring] to continue. The Central bank was undersized. We did not have enough people to do all that we should be doing,” he said.

“Then the additional factor, with Brexit, the size of the financial system is getting bigger, and that does require more people.”

Mr Lane also discussed what he termed the “remarkable” growth in employment in the economy, as well as the risk that emerging wage pressures could put the economy under stress. He urged the Government to run budgetary surpluses and build up a rainy day fund while the economy was doing well. It was, he said, “a reasonable political choice” to engage in public investment and hire more public sector workers while unemployment was low, “but if you want to do that without overheating, you have to raise revenue to more than offset that”.

“This is something to really be concerned about, that if we have overheating. the damage can be quite long-lasting. It’s easy to raise wages, it’s difficult to cut wages,” he said. “The bigger issue right now is not demanding too much from the Irish economy.”

Mr Lane also warned that fiscal discipline must be maintained while the economy was running hot to avoid the need for spending cuts and tax increases when it slowed down.

Speaking on Wednesday around the launch of its annual report, Mr Lane said the economy, while performing well, was still vulnerable to a range of risks.

“Given the uncertainty around a number of risks, both domestic and international, it is right that we take a prudent approach and build resilience into the financial system.

“In parallel, our advice to the Government is to run sufficient surpluses during phases of good economic performance, in order to enable counter-cyclical fiscal measures in the event of a future adverse shock. The key to avoiding damaging austerity in a downturn is maintaining fiscal discipline during upswings,” he said.

Mr Lane’s comments came as he announced the financial regulator’s annual results for 2018. The Central Bank recorded a profit of almost €3 billion in 2018, with €2.38 billion of this figure set to be returned to the exchequer.

He also said its work on the tracker mortgage investigation was nearing completion. “Our latest update shows that €647 million has been returned to 39,800 affected customers, while enforcement cases against the six main lenders are ongoing,” he said.

Mr Lane emphasised the importance of tackling the Irish banking system’s high stock of non-performing loans (NPLs). “A high unresolved stock of NPLs constitutes a financial stability risk in the event of a future adverse shock: reducing NPLs – while maintaining protections for borrowers – is essential.”

He said the bank remained focused on Brexit, even after the immediate threat of a hard exit by the UK was averted at the end of March. “We will continue to analyse and work to mitigate the risks posed to the economy, consumers, the financial system and the regulatory environment,” he said.

Mr Lane also paid tribute to the staff of the Central Bank as he prepares to depart for the chief economist’s role at the European Central Bank (ECB). He will be replaced in the role here by Gabriel Makhlouf.