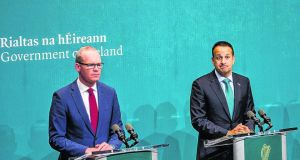 ‘What is tough is watching the ridiculous behaviour of the Taoiseach Leo Varadkar and his foreign minister, Simon Coveney, trying to destroy, like wilful children, relations with an ancient and friendly neighbour’, Bruce Arnold writes in the Telegraph

The UK is currently engaged in a stand-off with Dublin and Brussels over the withdrawal agreement that would secure the UK’s orderly exit from the EU. London is refusing to accept the inclusion of the backstop while Europe is refusing to drop it.

Arnold, in an opinion article for the Daily Telegraph published on Wednesday, delivered a scathing assessment of the Government’s policy and approach to Brexit.

“This is tough right now, being a proud and loyal British subject who has lived in, and loved, Ireland for more than 60 years,” he wrote in the piece, headlined ‘Bought by Brussels, little Ireland’s ridiculous leaders have landed it in a Brexit crisis’.

“What is tough is watching the ridiculous behaviour of the Taoiseach Leo Varadkar and his foreign minister, Simon Coveney, trying to destroy, like wilful children, relations with an ancient and friendly neighbour.

“Whatever faults the British may have, they understand independence and freedom. I can understand why they mock the ridiculous behaviour of these two men.

He described this approach as “painful and embarrassing stuff”, and was highly critical of the EU’s treatment of the UK.

“It was bad enough these past months having to witness the humiliations of the journeys to Brussels of prime minister Theresa May,” he said. “Begging at the European Commission and European Council brought her nothing.

“One cannot be surprised that Boris Johnson is so far refusing to go to Brussels. He is smart enough not to hazard a rerun of Theresa May’s ill-judged visits to the groups that became her tormentors.

“The European Parliament had a brief walk-on part in the humiliations – to approve the draft agreement. They seemed from time to time to be sniggering behind their hands at this unfortunate woman who was betrayed on all sides.”

Arnold, who has written for several newspapers including The Irish Times, the Irish Press, the Sunday Independent, and the Guardian, accused Dublin of acting as “cheerleader for these tormentors”.

“Yet their cheerleading operates in terms that make no sense at all,” he said. “Varadkar and Coveney are increasingly uncertain fools. Their desire to be players in a game they don’t understand is causing their clothing to unravel and their minds to lose their way.

“Their determination to work against the UK’s desire for a smooth and prosperous Brexit will in the end leave Ireland diplomatically estranged from its most important trade and political partner.

“With some satisfaction I see that public opinion in Ireland is at last questioning their policies.”

Arnold, who was awarded an OBE in 2003 “for services to Irish journalism and Anglo-Irish relations”, said Brussels was using the “spaniel-like euro-eagerness” of the Government “for its own ends”.

He added: “Once Brussels gets what it wants, it will dump all interest in Irish concerns.

“What Varadkar and Coveney are doing is helping Brussels to block the path for the UK government to implement the democratic decision of the British people to leave the EU. There was a referendum. The people gave their decision.

“And yet a Dublin government which brags that it is republican and democratic denigrates this decision as populism. It colludes with the EU to try to have the decision dismissed and resisted.”

Arnold’s article in the Daily Telegraph, which is a Eurosceptic, pro-Brexit, and Tory-leaning publication, was also critical of the Republic’s decision to rerun referendums to ratify the Nice Treaty in 2002 and the Lisbon Treaty seven years later.

He described the Lisbon Treaty as “a camouflaged EU constitution which would dissolve their republic into a new supranational state”. The Irish constitution, he said, “is now no more than a worthless gathering of sad memories”.

“If you want to understand Varadkar and Coveney’s behaviour, the Lisbon sell-out is the key,” he continued. “Irish politicians are honest: when they are bought, they stay bought.

“These uncertain fools have now led Ireland to be engulfed in a crisis as Boris Johnson, the new prime minister, seeks to lead Britain out of the EU either before or after an election.

“Yet again we face a crisis of democracy, with little Ireland and the huge EU refusing to recognise the democratic decision of the United Kingdom to leave the European Union. The ridiculous country in which I live is helping Europe in this abuse.”