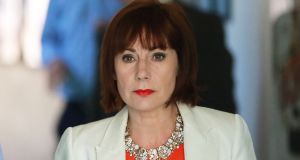 Minister for Culture Josepha Madigan TD made representations to the department of health about a proposed methadone clinic in her constituency. File photograph: Nick Bradshaw

Minister for Culture Josepha Madigan lobbied to ensure a methadone clinic would not be run from a health centre in her Dublin Rathdown constituency, according to a recent letter to her constituents.

Ms Madigan said she had confirmed “that a new methadone clinic will not be developed at Ballinteer Health Centre”, following representations to the Department of Health.

“This health centre is used by many local residents and would not be suitable as a methadone clinic,” she wrote in a July letter to constituents.

The Minister’s letter to local residents said she had confirmed the existing services in the Ballinteer centre were adequate, and a methadone clinic would not be provided from the centre.

“I know many people were concerned about this prospect following the closure of the methadone clinic in Baggot Street,” she wrote.

Methadone treatment is prescribed for drug addicts, to act as a substitute for illicit drugs, most commonly heroin.

In a statement, a spokesman for Ms Madigan said the Minister “fully supports the provision of health services by the Health Services Executive (HSE), including methadone services for those requiring them in their community”.

“After this issue was raised with her by a number of constituents in January, she asked the HSE to clarify its plans. It confirmed that existing services are adequate,” her spokesman said.

“The recent letter to constituents, the wording of which did not receive her prior approval before sending, provides an update on the issue,” he said.

The correspondence appeared to “celebrate the lack of services for vulnerable groups in her area”.

“She has done it before with Travellers, and now drug users,” he said.

“Insinuating that she used her ministerial influence to stop this is extremely disappointing . . . For a Cabinet minister to behave like this is a disgrace.”

A spokeswoman for the HSE confirmed there were “no plans at present to develop a methadone treatment service in Ballinteer Health Centre”.