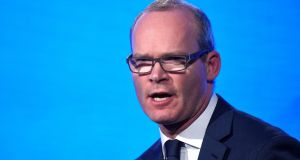 Simon Coveney: Ulster Unionist Party leader Robin Swann urged him to “step away from the microphone if he wants to repair relationships with unionists”. Photograph: Clodagh Kilcoyne/Reuters.

Unionist politicians have accused Tánaiste Simon Coveney of being “clumsy”, “unhelpful” and “aggressive” in his handling of Northern Ireland issues.

The charges came after Mr Coveney, the Minister for Foreign Affairs, raised the prospect of the British and Irish governments making decisions for Northern Ireland in the absence of a functioning powersharing system.

Mr Coveney, who has repeatedly said London-only direct rule would not be acceptable to the Government, said on Sunday that the Belfast Agreement “is where the rules are set”.

Noting that the Democratic Unionist Party “looks forward” to meeting Mr Coveney in due course, DUP MP Gregory Campbell said: “There is a lot of straight talking to be done. It has been regrettable that the positive relationship which existed under the Enda Kenny and Charlie Flanagan administration has been undermined in recent times.”

Mr Campbell rejected Mr Coveney’s declarations that Dublin and London were required to hold inter-governmental conferences on Northern Ireland if the Stormont institutions were not restored. “For the [Republic’s] Foreign Minister to suggest some role for his Government in the internal affairs of Northern Ireland ignores the constitutional reality.”

Mr Campbell said that despite a lengthy honeymoon period, Mr Coveney’s time in office as Minister for Foreign Affairs has been marked by “unhelpful comments which have been totally counter-productive”.

He said the DUP wanted to have a good relationship “with our nearest neighbour”, but the North’s place within the United Kingdom must also be respected.

“If Simon Coveney is so clumsy with diplomacy relating to his nearest neighbour, one wonders how he handles diplomatic matters in countries with which he is even less familiar.”

He also said the Government needed to repair its damaged relationship with the DUP following last week’s Brexit deal.

Ulster Unionist Party leader Robin Swann MLA urged Mr Coveney to “step away from the microphone if he wants to repair relationships with unionists”.

“This is the season of goodwill and we would like to show some goodwill towards Simon Coveney, but every time he claims he wants to repair relationships with unionists he puts his foot in it.

“Let’s be very clear. There is nowhere in the Belfast Agreement that permits joint authority or joint stewardship. As much as he and others may wish it to be different, it is simply not catered for.”

Mr Swann said Mr Coveney’s remarks, including that he hoped for a united Ireland during his political lifetime, undermined “the very basis of the Belfast Agreement – the consent principle”.

“The sooner he realises what he is messing about with and gets back to basics, then the easier it will be to repair the relationships which he claims he wants to mend.”

TUV leader Jim Allister MLA said Mr Coveney’s comments were “another manifestation of the aggressive attitude of his Government towards unionists and go well beyond the scope of the Belfast Agreement”.

However, SDLP leader Colum Eastwood agreed with Mr Coveney’s intervention, saying that “there can be no return to British direct rule”.

His intervention was “entirely consistent with the logic and the spirit of the Good Friday agreement”, Mr Eastwood said.

“In the absence of local institutions the only way to achieve that balance means a structure in which both the Irish and British governments hold joint authority.”

Sinn Féin MLA and national chairman Declan Kearney said his party was committed to getting the political institutions back up and running .

“This requires the British government to implement previous agreements and to end its support for the DUP’s blockade on rights which citizens enjoy everywhere else in these islands.

“In the face of the continued failure of the British government and the DUP to meet their commitments and agreements it is essential that the Irish Government acts decisively.”