Six Cabinet Ministers say they are in favour of abortion proposals 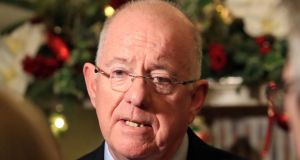 Minister for Justice Charlie Flanagan: politicians made a “real and enduring mistake” by allowing the Eighth Amendment to be inserted into the Constitution. Photograph: Colin Keegan, Collins

Six Cabinet Ministers have indicated their support for the Oireachtas committee on the Eighth Amendment’s recommendation to remove article 40.3.3 from the Constitution and allow for abortions up to 12 weeks.

Speaking to The Irish Times, Mr Flanagan said he believed this was primarily a woman’s health issue, adding that politicians made a “real and enduring mistake” by allowing the Eighth Amendment to be inserted into the Constitution.

The legal and medical consequences were not adequately discussed and were never foreseen, the Minister said.

“I am in favour of repeal. I want a respectful, calm and reasoned debate recognising the sensitivities involved. But I believe this is an issue that is primarily one of women’s health.”

The Oireachtas committee’s proposals will be discussed informally by the Cabinet on Tuesday, ahead of an official decision being adopted by the Government in the new year.

Minister for Health Simon Harris said he would make his views known when the committee’s report was published on Wednesday. However it is understood he is in favour of its recommendations.

Ministers Paschal Donohoe, Michael Creed, Richard Bruton, Michael Ring and Mary Mitchell O’Connor declined to state a position. The said they would read the final report, and would be guided by the discussions in Fine Gael and Government.

Tánaiste Simon Coveney said he would make his views “very clear” in due course. Taoiseach Leo Varadkar said his view had changed over time but he would not offer a position until he had read the report and discussed it with his colleagues.

Finian McGrath said he was in favour of repealing the amendment but would discuss the other proposals further with his election team.

Fine Gael and Fianna Fáil have free votes on the issue. Fianna Fáil leader Micheál Martin said he “comes from a background which in many respects has always been a pro-life but I have never been absolutist or judgemental”.

He said: “There is the other side of the equation as well. There is a baby in the womb. Some people would call it a foetus right up to the birth. I couldn’t do that.”

Mr Martin said his view would only become clear when the Government brought forward proposals on what exactly the referendum question should be.

The Oireachtas committee had focused on the findings of the Citizen’s Assembly “and all the questions they were asked”, he said. “But I think there could be a wider issue as to how you legally put the question.”

He also indicated he did not envisage playing a leading role in the campaign next year.

The Labour Party also confirmed on Friday it will back the position put forward by the committee, allowing abortion up to 12 weeks.

This is a step further than the party’s previous position of allowing abortion in cases of rape, incest, fatal foetal abnormality or where the mother’s health was at risk.