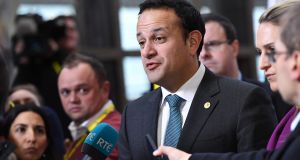 Speaking in Brussels, Taoiseach Leo Varadkar said he would wait to hear the views of Fine Gael in the new year before the Government decided on a course of action. Photograph: Emmanuel Dunand/AFP/Getty Images

Taoiseach Leo Varadkar and Fianna Fáil leader Micheál Martin have stopped short of publicly supporting the final recommendations of the Oireachtas committee on the Eighth Amendment.

The committee voted to propose the repeal of article 40.3.3 of the Constitution and allow the Oireachtas to legislate for abortions up to 12 weeks without restriction.

Both party leaders have declined to state if they would back the proposals by the committee but said they would make their positions known in the new year.

The Government has committed to holding a referendum on the issue and must produce legislation by the end of January. Two possible dates are being examined for a referendum – May 14th and June 8th.

Mr Martin said he was in favour of allowing terminations in the cases of rape, incest and fatal foetal abnormality. However, he acknowledged “the difficulties in legislating for these issues and the work that the Oireachtas committee has put into these difficult questions over recent months”.

Mr Martin added: “I intend to study all submissions to the committee over Christmas and will give a more considered view on their recommendations in the new year.”

Speaking in Brussels, the Taoiseach said he would wait to hear the views of the Fine Gael party in the new year before the Government decided on a course of action.

Mr Varadkar said he and his Cabinet colleagues would read the report over Christmas and would then make the course of action known.

“This a decision for the Irish people and I believe the time has come to allow Irish people have their say on this issue. But I will be doing my best to make sure the debate that we have is respectful and civilised, I think that is really important.”

Among the committee’s proposals are repealing article 40.3.3 of the Constitution and allowing the Oireachtas to legislate. It also agreed abortions should be permitted when a mother’s life, health or mental health is at risk, and up to 12 weeks without restriction.

Compassion should be shown to families who receive a diagnosis of fatal foetal abnormality and terminations should be made available to them, the committee said.

It agreed gestational limits should be based on medical advice and provided for in legislation. Two clinical physicians would be required before a termination is granted, it found.

The Oireachtas committee agreed the contents of its final report on Thursday, with the dissent of three members.

In a statement, the three TDs confirmed they would compile their own report and would publish next week. “The systemic imbalance in the functioning of the committee precluded any fair assessment of the issues. An unacceptably flawed process has led inevitably to cruel and unjust recommendations,” they said.

Various TDs declined to comment on the proposals of the Oireachtas committee, insisting they would consider their recommendations over the Christmas period before making any public comment.

Independent Alliance Ministers Finian McGrath and Shane Ross told The Irish Times they were in favour of repealing the Eighth Amendment. Mr McGrath said he would be discussing the report with his supporters over the coming weeks.

Sinn Féin has confirmed it is to review its position ahead of a potential referendum campaign. The committee’s proposals go beyond their party position but it is to review the matter in light of the recommendations. The report will be published in full on Wednesday and will be sent to the Dáil for consideration.