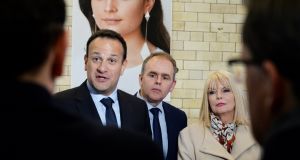 Taoiseach Leo Varadkar at the launch of the Action Plan for Education 2019 in Dublin on Thursday. Photograph: Julien Behal

Taoiseach Leo Varadkar has suggested that the UK, rather than the EU, should make further concessions to break the Brexit impasse.

Talks between the UK and EU have reportedly made little progress in recent days, ahead of a number of House of Commons votes next week. The sticking point is the backstop, the insurance policy to avoid a hard Irish border.

“In terms of making concessions, I think we’ve made a lot of concessions already,” Mr Varadkar said.

“I often wonder why people are asking us to make further concessions, we’ve made a lot of concessions already; accepting a UK wide element to the backstop when we only ever wanted it to be Northern Ireland specific. We never asked to tie-in Britain into any of these arrangements.”

Mr Varadkar said the EU has already agreed to a review clause and a good faith clause to help Mrs May get her deal over the line.

“This problem of a hard border on our island with disruption to trade and our economy, these are problems created in Britain. Surely they are the ones coming forward with further concessions and further offers to us in terms of what more they can do to mitigate the damage they are creating. ”

Meanwhile, the Northern Ireland director of the Confederation of British Industry has warned that business investment is “evaporating” in the North as economic growth grinds to a “near standstill” because of the Brexit stalemate.

Angela McGowan said the uncertainty was making the North’s economy “more fragile than ever”.

“No deal would unleash a minefield of consequences on the local economy that cannot be circumvented by mini-deals and last-minute horse-trading. Holding out for unicorns will guarantee no deal. Only backing a deal will take business uncertainty off boiling point,” she said.

The Chartered Accountants Ulster Society was similarly downbeat, warning the North would be in the “eye of the storm” if the UK leaves the EU without a deal. It said a new industry survey found that just 11 per cent of businesses in the North were Brexit ready and more than half of firms currently have “very little” or “no plans in place to deal with the UK leaving the EU.

Speaking at the society’s annual dinner on Thursday in Belfast, its chairman Niall Harkin said many businesses were in disbelief that with just 22 days to go there is still no deal in place or an agreement to avoid a hard border on the island of Ireland.