International Women’s Day becoming a ‘chance to skive off’ - Minister 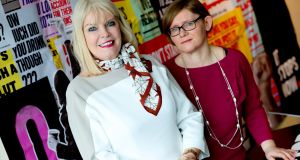 Minister of State for Higher Education Mary Mitchell O’Connor and Orla O’Connor, director of the National Women’s Council of Ireland, are pictured at a European Conference in Liberty Hall, Dublin on Thursday. Photograph: Maxwells.

International Women’s Day is in danger of becoming “what holy days used to be” and “a chance to skive off with friends”, the Minister of State for Higher Education has said.

Mary Mitchell O’Connor said she thinks the annual occasion, which takes place on Friday, needs to be repurposed in order to achieve “our objectives”.

“The problem as I see it is that International Women’s Day is in danger of becoming what holy days used to be when we were going to school back in the day, a chance to skive off with friends and to have no homework for that day,” she said.

“I think that we need to repurpose now International Women’s Day so that we actually achieve our objectives.”

Ms Mitchell O’Connor was speaking at a conference in Dublin on Thursday in relation to ending sexual harassment and violence at third-level institutions.

She said the majority of people attending events in relation to International Women’s Day would be women as the level of interest from men was “small”.

“Something is wrong with that picture...I love being in the company of women but I believe that we’re all making a huge mistake if we think that by talking about women’s issues to groups made up of almost exclusively of women we’re going to change to things,” she said.

Ms Mitchell O’Connor said the Government is due to announce initiatives on Friday in relation to women’s issues following a Cabinet meeting, which will be “groundbreaking”.

The Dún Laoghaire TD said there is “good work” happening in some third-level institutions in relation sexual harassment and violence and that “minimum standards” will be put in place. An expert group, established last October, is due to make recommendations on the issue in the coming weeks.

“We certainly need to do something, it is a reality that there is sexual harassment and violence on our campuses and we have the numbers,” she said.

Ms Mitchell O’Connor also said that after she announced 45 senior academia roles within the higher education sector over the next three years were to go to women, “men stayed mostly silent, presumably feeling safer in silence”.

“Women, committed feminists even, patted me on the head and said that they understood where I was coming from but that really the positions would be seen as second rate,” she added.

She said for generations men within academia have “effectively confined hundreds of professorships and lectureships to men”.

She said the reality is that academic posts are “outrageously biased in their distribution towards men” and “although we’re making some inroads we’re not making that many inroads”.

Orla O’Connor, director of the National Women’s Council of Ireland, said women aged between 18 and 29 were most likely to experience sexual harassment and violence.

“Many of these will be students which makes them less likely to report these crimes when compared to other groups,” she said. “Sexual harassment and violence, offline and online, have a significant impact on their lives, yet many women experience an ongoing atmosphere of silence.

“While sexual harassment and violence are not unique to higher education institutes, they are uniquely placed in showing leadership on this issue.”

Alan Kelly: Labour Party unlikely to enter coalition 09:24
Sunny weather expected with temperatures to reach 18 degrees 09:13
Teaching children the main stress source for families adapting to restrictions 02:53
'It is a scary time' - the nursing homes battling coronavirus clusters 02:29
Coronavirus: Why are men twice as likely to die as women? 02:09