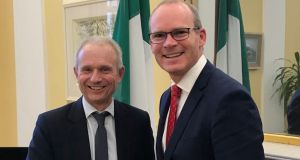 Mr Coveney’s spokesman said the two men met, at Mr Lidington’s request, for an hour and had a “detailed exchange on the political situation in Westminster”.

Mr Coveney reiterated the Irish and EU position that the Withdrawal Agreement could not be reopened, but said that Dublin wanted to reassure Westminster that if the backstop were ever to be used it would only apply unless and until it was replaced by alternative arrangements.

The Tánaiste had earlier told journalists that he did not expect to say anything to Mr Lidington on Brexit that he had not said before.

The two men also discussed Northern Ireland and agreed on the “urgent need for devolved administration in Stormont through a new talks process for all the parties”, the spokesman said.

In a statement afterwards, Mr Martin said he welcomed the opportunity “to hear first hand an update on where things are from a British perspective”.

“It was a professional and constructive meeting in which we emphasised the need to avoid a no-deal Brexit and the very negative effects such an outcome would have on both our countries,” Mr Martin said. “We also emphasised the importance of maintaining the Good Friday Agreement and protecting the full European Union rights of Irish citizens living in the North.”