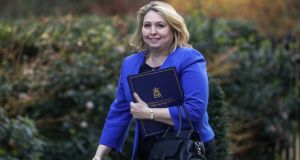 The brother of a Bloody Sunday victim has described Northern Secretary Karen Bradley’s comments about killings by members of the British army and police as “like a statement from a colonial governor of the past, lording over people.”

On Wednesday in the House of Commons Ms Bradley said killings by security forces during the Troubles were “not crimes”.

Liam Wray, brother of 22-year-old Jim Wray who was shot dead by a British paratrooper on Bloody Sunday in January , told RTÉ radio’s Morning Ireland that he wasn’t surprised at what she said.

“I was more surprised that she was so blatant and open about it, and it certainly was not a slip of the tongue. It wasn’t a word out of place, it was a clear statement, like some colonial governor of the past lording over people to say it was not a crime for British soldiers to kill people here in Northern Ireland.

“It is horrendous that anybody could have an attitude like that in public life in the 21st century.”

When asked about Ms Bradley’s later clarification when she used a point of order to say that she was expressing a general view rather than referring to any particular case, Mr Wray said: “It sounded like a worm getting off the hook, she had pushed it too far and she realised that from the response she got.

“She thought she could get away with it, to say it was a slip of the tongue. It was certainly not a misunderstood statement, it was a clear statement that British soldiers did not commit crimes when they murdered people.

“Karen, get honest, you meant what you said, it was clear, it was unambiguous, you came back then with a statement saying you were misunderstood, you were heard clearly.

“It’s not up for me to tell Karen Bradley to resign, if she was a woman of substance and a woman of dignity she would know what she should do herself.”

Mr Wray described his brother’s death as “very savage. It was a very sad day

for the family obviously and it’s affected us for a long time.”

Thirteen people were shot dead by British paratroopers when they opened fire on civil rights protesters on the streets of Derry in January 1972. A 14th died four months later in hospital.

A murder investigation was launched into the events of Bloody Sunday in 2012. A small of team of senior prosecutors in Northern Ireland is handling the complex and highly sensitive investigation. Prosecutors will meet victims’ families on March 14th before making an announcement on any charges being brought. The former soldiers under investigation over Bloody Sunday are thought to now be in their 60s and 70s.

Ann Travers, the sister of an IRA victim, told RTE radio’s Today with Sean O’Rourke show that Ms Bradley’s comments had done nothing to help the healing. “I just feel she’s put us all a step back,” she added.

Her sister Mary Travers was killed as she walked home from church with her mother and father who was a magistrate. She was aged 23 and worked as a primary school teacher.

Ms Travers told of she and her brothers had run from their home on hearing the shots and saw her injured parents and fatally wounded sister. “The memories will remain forever.”

As was the case with so many other families, the trauma and hurt was “so palpable, so real.”

She said she was horrified when politicians say things like Ms Bradley had said in the House of Commons. “Her comments were so stupid. They have done nothing to support those good men and women who were sent to Northern Ireland to do their job properly, who did not act criminally.

“She has done nothing to help them or us.”

Ms Travers said that any process of reconciliation has to be holistic and be an all island effort. However, she said she would find it very difficult to believe anything told to her by the IRA in a Truth and Reconciliation process.

“I don’t understand how she could stand up and say those words and think there would be no impact.” He said it was time for Ms Bradley to resign. “It is beyond acceptable for her to remain in that position.”

Professor of social policy at the University of Ulster, Deirdre Heenan said that the Northern Secretary’s comments were “grossly inappropriate” and that it appeared that prime minister Thresa May valued loyalty over capability.

Mr Eastwood added that it appeared Ms Bradley’s comments were part of the British government’s “cack-handed” attempts to influence the decision due next week from the Northern Ireland Public Prosecution Service about whether British soldiers will be prosecuted for the Bloody Sunday killings.

“This has been a long-running issue. State actors are trying to influence the issue.”

Prof Heenan said that some people want or need the truth to move on, while others want justice. “The difficulty is that as time moves on memories fade. It looks like the British government is trying to let the clock wind down.

“Here the legacy of the past seeps into the future. The reality is they can’t go on fudging the issue. People like Karen Bradley need to take ownership of their words.”

“She should resign right away, is she not aware that there was an inquiry that found our people completely innocent, was she not aware of David Cameron’s apology to the people for the behaviour of the army?

“For her to come out with ridiculous comments, that is completely outrageous.”

John Kelly’s brother Michael was aged 17 when he was shot dead on Bloody Sunday. “She has to resign, she has no option, she has to go because she cannot be representative now of anybody now in the North,” Mr Kelly said. “The Secretary of State is supposed to be impartial but she showed her true colours today.”

Ciarán MacAirt, grandson of a woman killed in Belfast’s McGurk’s Bar by loyalists during the Troubles, said her comments were “disgusting”.

“She has not accounted for the hundreds of killings perpetrated by and at the behest of state agents.

“Furthermore, she will never be able to whitewash such indefensible killings as the deliberate shooting dead of civilians including children, never mind all of the other unlawful killings by the British armed forces.” - additional reporting PA