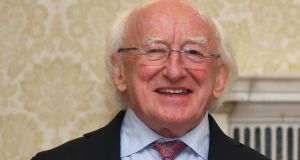 And most supporters of the President want to see him spared a re-election campaign, saying he should be returned unopposed to Áras an Uachtaráin for another seven years.

Asked if the President should serve a second term, 64 per cent of voters said he should, with 29 per cent saying he should not. Seven per cent said they didn’t know.

Support for a second term was strong across supporters of all parties, but was strongest among Independent voters, 73 per cent of whom want to see Mr Higgins, a former Labour Party TD, serve again.

Fianna Fáil voters were next most enthusiastic, at 69 per cent. Oddly, Labour supporters (63 per cent) were the least enthusiastic.

Of those who believe Mr Higgins should serve a second term, 64 per cent said he should return unopposed, while 32 per cent said they would like to see an election.

The President, who said he would serve only one term when campaigning for the office in 2011, has declined to answer questions on his intentions in recent years, leading to speculation in political circles that he intends to seek another seven years in office when his term expires next year.

Recently the President said he would make his intentions known after next summer – interpreted in political circles as an attempt to flush out any potential candidates. Any challengers would need to have a campaign prepared by then.

Under the Constitution, the President – who is currently on a State visit to Australia – has the power to nominate himself for a second term.

The poll was conducted on Monday and Tuesday of this week among a representative sample of 1,200 voters at 100 points across all constituencies. The margin of error is plus or minus 2.8 per cent.