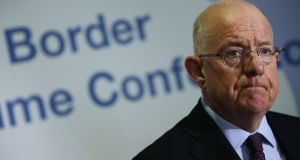 Minister for Justice Charlie Flanagan accepted there were difficulties with the current legislation but denied it was unconstitutional. Photograph: Brian Lawless/PA Wire

A report by the former chief justice John Murray has found that current data-retention legislation amounts to mass surveillance of the entire population of the State.

Mr Murray’s 190-page review was published on Tuesday, recommending a series of changes to the current statutory framework, which he says is in breach of European law.

The judge said the Communications (Retention of Data) Act 2011 involves the retention and storage of historic data pertaining to all electronic communication.

This includes communication via fixed line and mobile telephone, internet communication and text messages and is being done without the consent of those affected.

Mr Justice Murray said the arrangement is universal and indiscriminate in application and scope. He said it affects the retention and storage of journalists’ communications data.

In relation to journalists, the judge said data pertaining to the time, date, location, destination and frequency of a journalist’s telephone calls is available and can identify sources.

“For example, location data linking a journalist’s telephone calls with those of another caller in the vicinity of, say, Leinster House before or after a sensitive meeting in which that person was known to have been involved, might well be thought crucial in this regard,” he said.

Minister for Justice Charlie Flanagan accepted there were difficulties with the current legislation but denied it was unconstitutional.

Mr Flanagan said he accepted Mr Murray’s recommendation that the law should be repealed and he produced the heads of a replacement Bill, which makes no reference to journalists.

Mr Justice Murray recommended the data of journalists should not be accessed by any State agency unless he or she is the subject of a criminal investigation and cannot be accessed for the purpose of investigating an offence committed by another person.

That data should only be granted with the permission of a High Court judge, and the journalist should be notified of the request and its outcome, he said.

Mr Flanagan’s new legislation does not accept a number of recommendations, including the limits to when the data of a journalist can be accessed.

The Minister said: “There may well be situations where access to data will be required. What the legislation will do is clearly define what these circumstances are.”

The legislation proposes a District Court judge should have the authority to disclose some data but does agree notification should be given to a person if their data is being accessed.

The Bill states a person’s metadata, location and subscription data can be accessed only by certain bodies if the person is found to be involved in a serious offence or is posing a serious threat to the State.

Mr Flanagan said there was a balance to be struck between a person’s right to privacy and the need to combat serious crime and terrorism.

The report by Mr Justice Murray was sought by the Tánaiste Frances Fitzgerald in January 2016 in response to allegations the Garda Síochána Ombudsman Commission wrongfully intercepted the phone records of three journalists.

The Minister stated he was not in a position to detail how many journalists’ data had been accessed by authorised bodies since 2011.

The Murray report also recommended the designation of a supervisory authority, whether it be the Data Protection Commission or another independent agency, to ensure the legislation is not abused.

However this is not accepted by the Minister for Justice in the new data retention Bill.

Mr Flanagan said overall oversight of the new legislation will continue to be vested in a serving High Court judge and with a serving judge of the Circuit Court independently investigating complaints.