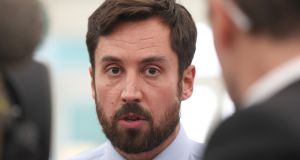 Minister for Housing Eoghan Murphy: will signal a number of changes to planning and development laws at the Irish Planning Institute conference in Dublin on Friday morning. Photograph: Niall Carson/PA Wire

Shared accommodation aimed at young professionals is to be developed in cities as part of a Government effort to reduce the cost of renting.

Minister for Housing Eoghan Murphy is to signal a number of significant changes to planning and development laws at a conference held by the Irish Planning Institute in Dublin on Friday morning.

Among them is a move towards the development of apartment complexes similar to student accommodation and based on models in London and Berlin.

The proposal would see the construction of high-rise developments catering for hundreds of people, with shared services offered to tenants.

In the individual apartments, residents would have their own bedroom and ensuite, but would have communal kitchen and livingroom facilities.

The proposed developments would be based primarily in cities and would be offered to renters at affordable prices, Government figures say.

Similar co-living developments have been rolled out in the United Kingdom and Germany and have been successful in attracting young professionals.

The initiative is at an early stage but is part of a Government strategy to develop the build-to-rent sector in Ireland.

Among the other measures to be signalled by Mr Murphy on Friday is a commitment to establish a new working group to assess the viability of the 2015 apartment guidelines introduced by former minister for the environment Alan Kelly.

Mr Murphy will ask for a report to be completed by the end of November with recommended changes to the guidelines.

The Minister had signalled such a shift previously to allow for a relaxation of the ban on bedsits, a move that has been criticised by some.

Mr Murphy will also commit to a review of urban height limits by the end of the year, which will pave the way for high-rise buildings to be constructed.

The Minister and Taoiseach Leo Varadkar have insisted such developments must be considered as part of the housing crisis. Mr Murphy will stress such projects will only be considered “where it makes sense”.

Mr Murphy is also examining how to bring the cost of building apartments down by, among other measures, reducing the need for car parking spaces in apartment blocks.

The Minister will question if there is a requirement for parking within 1km of a Dart, Luas or Urban Rail Link. Developers will instead have to justify the need for car parking inside city cores.

The measures are being brought forward in an attempt to make building more affordable for developers.

Any changes to planning laws will be announced alongside the National Planning Framework, Government figures said.

The Government is also expected to make a number of announcements in the area of housing in next week’s budget, including a significant investment in social housing.

It is also facing significant pressure to introduce a vacant home tax on empty properties across the country.