The reason Boris Johnson might want to suspend the British parliament

Move to prorogue parliament is logical, even if it is a trashing of the British constitution 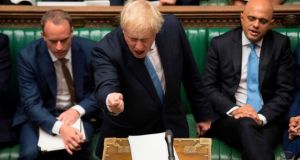 The decision of British prime minister Boris Johnson to suspend – or “prorogue” – parliament for more than a month as the clock ticks down to the Brexit date of October 31st provoked a predictably huge storm in the UK and will almost certainly incite a parliamentary rebellion that his government is likely to lose.

This is most probably his intention. Such a defeat will likely lead to a general election in early October – if not before – in which Johnson will enjoy significant advantages. Some recent polls suggest that the Conservatives enjoy a strong lead and Johnson’s novelty as a prime minister, as well as his enormous capacity to speak to voters and be listened to, will make him a hot favourite to beat his rivals, especially Labour’s Jeremy Corbyn, in a short, sharp campaign. Corbyn remains a key advantage for the Tories.

Crucially, Johnson can go to the country before Brexit – enabling him to run on a promise of delivering Brexit “with or without a deal” on October 31st, his already familiar mantra since taking office in July.

A briefing from Number 10 reported in the British media on Wednesday suggested that his preference was for a November, post-Brexit election. But it is hard to see how he could viably fight an election with the possibility of no-deal chaos – transport chaos, potentially shortages of some foods and medicines, etc – to accompany it. More likely Number 10 is trying to dial up the Remainer outrage.

It seems much more in Johnson’s interest to hold the election before the negative effects of a no-deal Brexit are felt by voters. So Johnson is in a pretty good position to fight an election in the coming weeks.

The judgment of Johnson is not that this is necessarily an ideal environment for him to fight a general election. It is plainly not. But it is probably his judgment that it is a better time than the available alternatives.

Why would he want an election? The first rule of politics: you have to be able to count. Johnson has no parliamentary majority, and he watched – and participated – as Theresa May was destroyed by her inability to command a majority in the House of Commons.

Whether Johnson presides over a deal, or a no-deal Brexit, he would face the same tyranny of the parliamentary numbers. The effects of a no-deal, if they are anything like those predicted by his own officials, would destroy his government. But a deal might do the same, as Tory ultra-Brexiteers – and perhaps the DUP, depending on how a new deal treated the North – would surely stand against it.

So without an election, Johnson faces a choice between the devil and the deep blue sea. If he wins an election, however, he can either do a deal (and he stands a chance at getting a tweaked deal from the EU with a new mandate) and get it through parliament, or he can hold out for a no-deal, which he can survive as long as he has a majority.

To get his election, though, Johnson needs to provoke his opponents into defeating him in parliament on a confidence motion. Judging by the reaction on Wednesday, his opponents will do his bidding.

Johnson’s outrageous act of seeking to suspend a hostile parliament, therefore, is entirely logical, even if it is a trashing of the British constitution and its parliamentary democracy. It is also an astonishingly audacious move, which demonstrates how much he has seized the political initiative.

In his book on Winston Churchill – which reveals to the reader a lot more about Johnson than it does about Churchill – Johnson observed that “To some extent, all politicians are gamblers with events.”

“They try to anticipate what will happen, to put themselves ‘on the right side of history’, to show off their judgment to best advantage,” he wrote.

This is, clearly, what Johnson applied himself to in the Brexit referendum. Wednesday’s move shows that he has moved to the next stage – of trying to bend events to his advantage.

In Dublin and in Brussels, they will sit tight and watch. There will be no real engagement with the UK until the great showdown has a clear winner. Johnson’s opponents will seek to portray it as a profoundly anti-democratic manoeuvre; he wants a “people vs parliament” election.

This fight is in Westminster, and then, probably, across the UK. In truth, it has been coming for months. Only once it is resolved will the Brexit deal-making resume, as all the while, the no-deal clock ticks louder and louder.