Unlikely issue will unseat Government, despite FF TD’s take on it 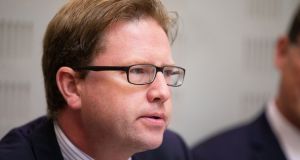 The Government’s plan to roll out high-speed broadband across the country at a cost of €3 billion has been the focus of much scrutiny over the last year.

The latest blow to the project has come in the form of a majority report by the Oireachtas Committee on Communications.

Over the course of 25 conclusions and 10 recommendations, there are significant criticisms on everything from the initial tendering process right through to the proposed governance of the plan.

The report calls for a new cost-benefit analysis and a three-month independent review. Crucially, it also calls for the network to remain in State ownership at the end of the contract.

Tensions between Fine Gael members of the committee and Opposition politicians were clearly evident at the launch of the report on Tuesday.

Fine Gael members made clear that they want the Government to proceed at pace and sign the contracts or as senator Joe O’Reilly more colourfully put it: “Get on with the bloody thing now and do it.”

They pointed out that the report passed by five Opposition votes against three, the trio being the chairwoman Hildegarde Naughten, Mr O’Reilly and his fellow party senator Tim Lombard.

“We now need to press ahead, we don’t need expert independents coming in to give us more information, we need to get boots on the ground,” said Mr Lombard, speaking against his committee’s report.

Mr O’Reilly contended that there is nothing new to learn.

“Should we have another review process, in my view no, simply because it will not give us information we do not have now. Question two is should we reduce the €3 billion. You can take €1billion off it and you do that by taking 20 per cent of the homes out of it, and that defeats the whole purpose.

“The last thing that comes up is the State ownership. People talk about State ownership, that train left the station when we sold Telecom Éireann,” he said.

And yet the report he was launching tells a different story. It has recommended that an independent review come back after three months and report on whether there is any other viable option, which Fianna Fáil TD Timmy Dooley says there may be.

He says there is still a “gap of knowledge” and that is around whether or not it might be possible to engage a contractor through a universal service obligation (USO).

Under a USO, the State is obliged by law to provide a service even if they are uneconomic to operate.

Another recommendation is for a new cost benefit analysis. Despite Fine Gael claims that the €3 billion probably cannot be reduced, Green Party leader Eamon Ryan believes otherwise. He says that new homes could have a stipulation in their planning permission that such a connection must be provided.

“We don’t have to keep subsidising some house at the top end of the hill at a huge cost,” he said.

And the report finds there is “no justification” for not keeping the network in State ownership, especially given the fact that the State is by far the majority investor.

For all the threatening sounds, it seems highly unlikely that the issue will unseat the Government, although the two Fianna Fail TDs on the committee struck a very different tone on this yesterday.

While Mr Dooley said he wouldn’t be pulling the Government down if they ignored the committee’s recommendations, party TD James Lawless painted a more opaque picture.

“We have Brexit, and a budget, but after that I think all bets are off.”

Regardless of this, the latest development in the broadband saga presents yet another headache for the Minister for Communications Richard Bruton, who must now consider the findings and bring them to Cabinet with a decision on how to proceed.