New councillors from Bangladesh, India and Sweden on life in Irish politics 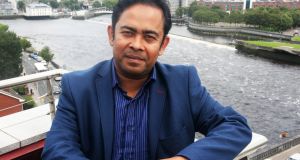 As the first Muslim councillor elected in Limerick, Abul Kalam Azad Talukder has had his fair share of doubters.

“Before my election I did have people saying to me, ‘oh, there is no point, you are wasting your time, your energy, your money.’ I said no, I can judge this, I know Irish people.”

A first-time councillor, he was elected on the final count in the Limerick City West area. Over the course of that May weekend, 948 other councillors were elected. And yet only nine of these are from a migrant background, according to figures from the Immigrant Council of Ireland, up from three in 2014.

Talukder, who hails from Bangladesh, first had his interest piqued by politics when he met former Fianna Fáil junior minister Peter Power in 2004. At the time, he transitioned from working in a bar to managing a restaurant, while also working as a taxi driver.

“In my nearly 20 years here, I have never been without a job, not even for a week,” he says. After years of involvement with the local Fianna Fáil group, he finally decided to take the plunge and run for election himself.

He said he has encountered xenophobia and racism but that the vast majority of locals have welcomed him. “Most people say, ‘we like change, we like new voices, we like new ideas’ and maybe one or two people say they don’t want an outsider.”

For Talukder, there appears to be a twin pressure in that many migrants in the area now view him as being their voice, and also he feels he must somehow prove that he can do the job.

“It is a little bit difficult because in this system, I am very new. It is taking time for me to work it out, and migrant people have a lot of expectation from me.” He says some of the problems the community bring to him would not be issues that the council would have resolved or addressed before.

“Many migrant people in Limerick feel that they didn’t have a voice before. They didn’t come to the city council much, but now it is very busy.”

He says it is hard managing the new role and finding enough family time. He says his two young daughters miss him a lot.

Talukder has made it his mission to make a success of the next few years and says this will show other non-nationals that they can do it too. “I need to prove to myself that I can do it, that I can do this.”

The political parties, he feels, need to be more welcoming to those from a migrant background and make greater efforts to increase their diversity.

The Immigrant Council of Ireland is in full agreement. It compiled a list after the local elections, detailing how 54 people from a migrant background ran for local office.

It says the fact that only nine were successful shows how far there is to go, especially given that one in eight people in Ireland is from a migrant background.

The council is calling on political parties to publish information detailing the percentage of their migrant membership in order to identify where the gaps are.

It also wants one of the Taoiseach’s nominees for the Seanad to be specifically from a migrant background.

In May, candidates from countries including Romania, India, Poland, Ukraine, Spain, Kenya and Sudan among others ran in the local elections.

People Before Profit councillor Madeleine Johansson is from Sweden and has previous experience of local politics in that she was co-opted onto South Dublin County Council in 2016 when Gino Kenny entered the Dáil. She then took her seat on the 11th count in May’s election.

Although she was already a sitting councillor, she was anxious during the campaign.

In terms of xenophobic abuse, she said there was one comment to the effect of “go back home to Sweden”.

“Everyone will comment on social media, you just have to know how to ignore and block people. For me, it is maybe different because I am white. Sometimes people think they can say xenophobic things about others because I’m white and they think I won’t take offence.”

One of the big issues for her has been dealing with questions from those in the direct provision centre in Clondalkin. They put their trust in her that she will represent them, she says.

Johansson says that as things stand among the migrant community, there is a “barrier and a lack of confidence in terms of taking a first step” into politics. Her advice to anyone wanting to emulate her success is to take the time to read about the different political parties and their policies and find their natural fit and then, if they have questions, to contact her or one of the eight other non-national councillors.

“There is a lack of engagement from migrants with the political process. The registration process can be difficult, and understanding political parties can be daunting.”

He ran in 2009 and missed out by only a few votes, but this time around clinched a seat.

He says the first few months in the new job have been an eye-opener.

“My name is Baby, but I am the baby in the council too.”

He says there has been “a lot to learn” but that the support of his fellow Fine Gael members has steered him through the first patch. Originally from Kerala, he followed his wife to Ireland in 2001 and they now have two children. He did not harbour the same anxieties as Johansson and Talukder about running, having learned a lot from his first attempt.

“I knew this time I would win, people were happy with me.” He said he has made it is priority to respond to every email he received since he took office, and also makes a point of visiting people in their homes to talk them through whatever issue they are facing.

“People really do appreciate that.”

The vast majority of constituents have welcomed him, he says, but not all. He points out that anti-social behaviour is a particular problem in Tallaght.

“I have had some saying, ‘you are a bloody Pakistani’. But I tell them that I’m not from Pakistan, I am from India.” He laughs as he recounts these interactions and says he doesn’t let it get to him.

All three of these councillors hesitated when asked if they would ever consider running for the Dáil.

“I will never say never,” said Talukder, while Pereppadan laughs and says if Fine Gael asks him, he will think about it. Johansson says she hasn’t ruled anything out, but adds: “This is not about me. If the people in the local area are happy, then so am I.”