North's first same-sex weddings may be held from February 10th 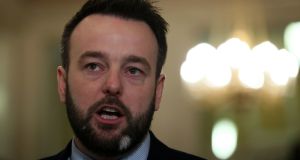 SDLP leader Colum Eastwood: ‘This is an historic moment for Northern Ireland and for the LGBT community here as they have their love officially recognised.’ Photograph: Brian Lawless/PA Wire

Same-sex marriage effectively became legal in Northern Ireland on Monday as couples now are entitled to register to marry.

Couples can now give notice of their intention to enter into a civil same-sex marriage to the General Register Office for Northern Ireland.

The first same-sex weddings are expected to take place from February 10th, following the minimum period of notice of 28 days.

Patrick Corrigan, the Northern Ireland director of Amnesty International, which played a leading role in the campaign, said Monday was an “historic day for equality and human rights” in the North.

“For too long, LGBT+ people in Northern Ireland have been treated as second-class citizens. So, today is an incredible moment for same-sex couples who can finally marry and have their relationships recognised as equal,” he said.

“In the absence of devolved government, we took our campaign to Westminster and won equal rights there. Now, with devolution restored, the new Executive at Stormont must prove that it is ready and willing to provide a rights-respecting government for all who live here,” Mr Corrigan added.

He added: “This is an historic moment for Northern Ireland and for the LGBT community here as they have their love officially recognised. I regret that we were not able to deliver equal marriage in Stormont, but it was untenable to expect our LGBT+ friends to wait any longer for equality.”

Foyle MP Mr Eastwood said now was a time to “reflect on how far society has come and to consider the work that still needs to be carried out in regard to LGBT rights”.

“Clearly, more must be done to address the critical need for support and advocacy for the LGBT community including difficulties accessing healthcare specialists among other health inequalities,” he added.