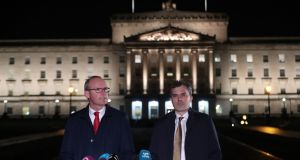 The British and Irish governments on Thursday night published their estimate of what constitutes a “fair, balanced and inclusive ” deal to restore the Northern Executive and Assembly.

Tánaiste and Minister for Foreign Affairs Simon Coveney and Northern Secretary Julian Smith chose the backdrop of Stormont to make the announcement that they had signed off on a deal.

Mr Smith said he has written to the North’s Speaker asking him to recall the Assembly on Friday to enable its restoration before the weekend.

Mr Coveney said the document represented a fair and balanced deal to restore the Assembly and he wanted to urge all the parties to grab the opportunity to get back to work.

It will be for the North’s five main parties to decide whether they would accept the proposed deal.

DUP leader Arlene Foster said she believed the deal constituted “a basis upon which the Assembly and Executive can be re-established in a fair and balanced way”.

They added that reforms to the health service, education and justice will be prioritised by a new Executive, “as well as important improvements in transparency and accountability, and in how civil servants, ministers and special advisers conduct themselves”.

On the difficult question of the Irish language, they said the deal “offers a new cultural framework” that will include a new Office for Identity and Cultural Expression to promote cultural diversity and inclusion across all identities and cultures.

There also will be a commissioner “to protect and enhance the Irish language and a further commissioner to develop the language, arts and literature associated with the Ulster Scots/Ulster British tradition in Northern Ireland”.

They added there would “be meaningful reform of the petition of concern bringing it closer to its original role, as conceived of the Good Friday agreement and as a means of building consensus.

“It will not be a veto for any one party.”

They also said there was a “major financial package” available from the British government if the Assembly is restored. The Irish Government, Mr Coveney said, would also provide a three-year financial package to invest in key infrastructure projects in Northern Ireland.

In a joint press conference in front of Parliament Buildings just before 10pm on Thursday, Mr Coveney said the document was filled with compromises, but they were fair compromises. He paid tribute to the murdered journalist Lyra McKee and, referring to the impetus towards the restoration of the Assembly after the North’s politicians were “called out” at her funeral, said it was now time for them to show leadership and to get back to powersharing.

He and Mr Smith had taken the decision to publish the text of the document so that the parties could work with it and use it as a basis to restore the Assembly.

Mr Smith told reporters that “we have a document which hopefully . . . will make all of the [politicians] think carefully about coming back in and the prize was that they could all take responsibility in this new decade for moving things on”.

Mr Smith said there was “one chance to get this right, and be under no doubt everybody realises this is now”. He indicated that if the parties did not agree to reinstate Stormont he would call Assembly elections on Monday night.

1 DUP pleads with UK to reduce salary threshold for migrant workers coming to North
2 A Russian cruiser with ‘cannibal rats’: What other ‘ghost ships’ could be out there?
3 Grave concern in North over London’s new immigration rules
4 At least eight shot dead in German town of Hanau
5 Gardaí investigating four-lane motorway sulky race
Real news has value SUBSCRIBE