‘Local and vocal’: What does Wexford think of Verona Murphy? 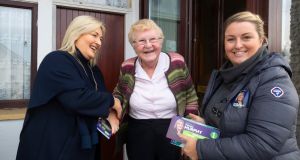 Large new campaign signs for Verona Murphy have been posted on the grass verges on the approaches to New Ross and Wexford town.

“She’s Local & Vocal,” the sign reads, with the letter V engulfed in flames.

But if this strikes any passing motorists as a metaphor for the state of her campaign in the Wexford byelection, few people locally seem to take the view that she has been damaged by recent controversies.

Those erupted after Murphy said Islamic State was a big part of the immigrant population, that children as young as three or four may have been manipulated by the terror group and that some asylum seekers might need to be “reprogrammed”.

Separately, details of an employee relations dispute within the Irish Road Haulage Association, of which she is president, surfaced during the week.

Where before has a candidate in a local election been able to get that kind of publicity? €100,000 wouldn’t buy you that

In an interview with South East radio on Thursday, Murphy apologised for the comments on immigration and expressed an “understanding of the offence and hurt that I have caused”.

Former Fine Gael councillor Willie Fitzharris, who campaigned with Murphy last weekend, does not think her comments will damage her attempt to win the seat vacated by Mick Wallace’s election as an MEP.

“She’s a good candidate who shoots from the hip, and that’s what has landed her in trouble, but that’s also what makes her who she is,” Fitzharris says. “There wouldn’t be a bad streak in her. She maybe wasn’t wise to word it like she did.”

Another Fine Gael source in the area, speaking off the record, says the view within the party locally is that Murphy hasn’t been damaged – so far – by the controversy.

“The amount of publicity, she’s getting – on every radio station, in all the newspapers, Ministers talking about her in the Dáil – where before has a candidate in a local election been able to get that kind of publicity? €100,000 wouldn’t buy you that publicity.”

Among those in the haulage industry in Wexford, which employs 4,000 people, Murphy appears to be admired as someone who gets things done. She is given credit for a reduction in road tax for hauliers in October 2015 from around €5,000 to €500-€900.

“She was very instrumental in the taxation on HGVs being reduced. I think she would have the support of the logistics industry, which is very prominent across south Wexford,” says TJ Crosbie, managing director of Autocar Logistics, which is based in New Ross.

Few in Wexford appear to share the view expressed by Fianna Fáil leader Micheál Martin that Murphy was “playing the race card”.

Some in the industry suggest the comments were informed by her role in the haulage association, and her perception of the risks faced by truckers coming through ports like Cherbourg rather than general negativity towards migrants.

There was very little talk on Thursday about the employee relations issue that surfaced in that day’s papers; instead, people were more likely to mention the 16 migrants found in the back of a lorry on a ferry that arrived at Rosslare Europort from France.

“It’s a big worry for the industry,” says one truck driver, who didn’t want to be named. “They walk out in front of you on the motorway so you’ll have to slow down. They’re going around with battery-operated hand grinders to try and open the back of the truck. There wouldn’t be much sympathy for them within the industry.”

He believes “that could have been on Verona’s mind when she made her comments”.

A recent interview in the New Ross Standard describes Murphy's long estrangement from her family, and a period spent in homelessness

Murphy’s home village of Ramsgrange consists of a few houses, a large church, a daycare and family resource centre, as well as a shop, hair salon, pubs and a takeaway, all clustered around a crossroads.

In the Sportsman’s Inn, a man who gives his name as Michael says Murphy “has brains. She’s educated. She gets things done. She was only being truthful in what she said ... She could have worded it better, and I’m sure she’s sorry about that now. But she’s not racist, by no means.”

He points to a news headline on his phone about the “16 found on their way to Rosslare. She’s in the lorry business. She’s had to speak up for drivers. She doesn’t deserve the flak she’s getting”.

‘Sound as a pound’

Outside Flood’s shop, which is within sight of the house Murphy grew up in, not everyone has heard of her, and only a handful are aware of the controversy. But those who have are supportive of the local woman.

“Verona Murphy’s not guilty of anything only speaking her mind,” says Paddy Meyler, who has known her all her life. “Verona Murphy is sound as a pound. She doesn’t hang around. She’s not one who ever got anything from anyone else. Anything she has, she earned herself.”

Those who know Murphy personally in the area cite her resilience and capability. They talk about how she left home at 14, dropped out of school at 15 and became a single parent to her daughter, Robyn, at 22.

A recent interview in the New Ross Standard describes her long estrangement from her family, and a period spent in homelessness before she bought her first truck aged 21, and her second a few years later. She was still in her 20s when she launched Verona Murphy Transport, which later amalgamated with another company. In her 30s she went back to do her Leaving Cert before doing a law degree.

Farther afield in Wexford town, most shrug off Murphy’s comments on immigration, and only a minority say they disagree. One of those is John Aldrich, a former professor of zoology at Trinity College Dublin, who has always voted Fine Gael but now says he would be more inclined to vote Green.

“I didn’t think what she said is appropriate at all,” he said. “It’s nonsensical.”

Deborah Doyle, who is working in Reader’s Paradise bookshop on Selskar Street, had never heard of Murphy before she saw a story on Facebook about the immigration comments. She was appalled.

“What would a person be thinking saying that? That’s like a Trumpism. God help families that are just trying to have a better life.”

A two-minute walk away, in Rainbow Wholefoods on North Main Street, owner John Linden didn’t know a lot about Murphy either until recently, but he believes her comments have been blown up by the media.

Does he make a distinction between political correctness, and the correction of false statements, such as the ones about Isis targeting three-year-olds? “Well, you could be right.” But, he adds, people are more “offended by this whole politically correct landscape”. He has, he says, considered changing the name of the store to ‘Politically Incorrect Wholefoods’. He still won’t vote for her, though, as he’d prefer to support a candidate outside the mainstream.

Nigel Hamilton is behind the counter of his shop, WR Hamilton & Son, which sells everything from carbolic soap to penknives.

“I wasn’t going to vote for her because of comments she made about farmers not being allowed to use the motorway,” he says.

As president of the IRHA, Murphy campaigned to have tractor drivers removed from the motorway. But since learning more about her, he has decided to give her his No 2, after Jim Codd of Aontú.

“I myself left school at 14, so I know what it’s like to work your way up. I’d have to admire her for that.”

Hamilton’s only objection to Murphy’s comments about migrants is that she apologised for them.

“If we go down the road where someone says what they think, and then apologises for it, are we going to end up in a situation where people are afraid to tell the truth and say what they really think?”

There is, he believes, a cohort of people locally who would share her views.

“And they’re often the people on the ground with experience of it. Their view, and the view of someone in a big house in Dublin, would be completely different.”