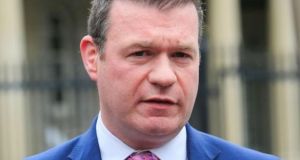 Alan Kelly: ‘How can they claim to be better on access when their emergency departments run on office hours and use the public hospitals as a pressure valve.’ File photograph: Gareth Chaney/Collins

Advertising by private hospitals needs to be regulated or banned over the untested claims they make about their services, the Dáil has heard.

They claimed to have the “most renowned specialists in the field - according to who?”, he asked.

“These ads turn my stomach,” he said hitting out at the failure to charge private hospitals which “piggyback” on public hospitals.

Consultants in the public system compete for senior positions and do constant professional development but private consultants can just hire a suite in a private clinic, “with nothing like same rigorous oversight”, he said.

When private are full they send their overflow to public emergency departments. “Is this not a serious dereliction of duty which makes a mockery of these adverts?

Raising the issue during leaders’ questions Mr Kelly asked “how can they claim to be better on access when their emergency departments run on office hours and use the public hospitals as a pressure valve”.

He said private hospital adverts should be regulated or banned in the same way that the advertising of prescription medicines to patients was prohibited.

The Tipperary TD said a “health apartheid” continues to exist and Ireland had the “shame” of being the only EU member state without universal health insurance.

And he accused the Government of being wedded to an ideology of privatisation of the health system despite the cross-party agreement to implement the Sláintecare plan for the health service where patients are treated based on need rather than ability to pay.

Mr Kelly said there were already five private hospitals on Dublin’s northside but a new €50 million private hospital was planned in Swords and the Taoiseach met the developers.

Tánaiste Simon Coveney said advertising was regulated and Mr Kelly labelled Fine Gael as pursuing healthcare with an ideological lens. “The facts don’t bear it out,” he said.

His party was committed to delivering Sláintecare but it would take 10 years and in the interim private healthcare had a role.

People could continue to opt for private care even when the Sláintecare programme is implemented, he said.