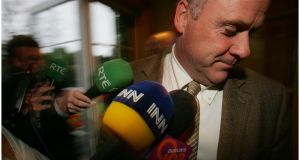 Minister for Justice Charlie Flanagan has called on Galway West TD Noel Grealish to “correct the record” for overstating figures on personal remittances sent home by Nigerians living in Ireland.

“It is unacceptable for any elected leader to present on the floor of Dáil Éireann a misstatement of facts,” the minister told The Irish Times ahead of delivering a speech at a defamation conference hosted by his department.

“I think it is important now that he correct the record and his statements underline the need for all of us in politics to show leadership, to exercise great care in the use of language.

Mr Flanagan said that he was “very concerned at the deterioration in the use of facts for comment.”

Taoiseach Leo Varadkar has said that the Central Statistics Office had calculated that €17 million a year was being sent home by the 17,000 Nigerian-born people in Ireland - a fraction of the “staggering” €3.54 billion that the Independent TD claimed Nigerians had sent home over the past eight years based on World Bank figures.

Mr Grealish has been accused of fomenting anti-immigrant sentiment by singling out Nigerian-born residents for special attention with misstated figures that exceed State calculations on the amount of money being sent back.

Speaking at a symposium on the reform of defamation law, Mr Flanagan said that “promoting the importance of truth and accuracy in public comment” was one area that needed to be considered in a review of the 2009 Defamation Act.

The Minister said that the Government needed to “calibrate a complex balance between different rights”, including the right to a person’s good name and the right to freedom of expression.

“We might perhaps add a further value: that of promoting the importance of truth and accuracy in public comment and debate insofar as that is reasonably possible,” said Mr Flanagan.