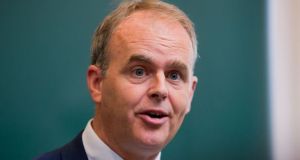 “We will push it for all it’s worth in rural Ireland,” said one Fine Gael figure ahead of Tuesday’s signing of the contract for the €3 billion National Broadband Plan, which will see half a million rural households and businesses connected with high-speed fibre broadband.

He wasn’t joking. The ink was hardly dry on the signatures when Fine Gael TDs and senators and election candidates took to social media immediately in a pre-planned campaign.

On and on it went, all over the country. The good news of Fine Gael’s munificence was spread widely and deeply. Party officials had collated and prepared the local breakdowns of the programme and the details were pushed out in a tsunami of good news, with added political spin: Fine Gael - Spending its money on you.

All untrue of course. Fine Gael is not spending anything on rural Ireland, or anywhere else. The Government, led by Fine Gael, is investing public money – and rather a lot of it – in the huge broadband project. This isn’t Fine Gael’s money. It’s your money.

After widespread criticism of the escalating costs, Fine Gael is determined to rebuild some political capital on the broadband plan – which is, however you describe it, an enormous investment.

Party chiefs have been worried about Fine Gael’s standing in rural Ireland for some time, and the knowledge that in many rural constituencies Fine Gael candidates will be in direct competition against Fianna Fáil has sharpened their desire to use the broadband plan for political purposes.

Opposition TDs are aware of it too. While there has been criticism of its vast cost – prompted by unprecedented public warnings from senior officials that the project was a waste of money – many opposition TDs have become more reluctant to oppose the project in principle, conscious of the desire for broadband improvements in rural areas.

Fianna Fáil said the contract should not be signed but in a statement on Tuesday the party criticised the slow pace of connectivity. Privately Fianna Fáil frets that the broadband project will give Fine Gael a fillip against it in rural constituencies. And that is precisely what Fine Gael is banking on.

But the relationship between announcing investments and reaping political rewards is a tenuous one. Voters tend to be more impressed when they see the actual delivery of projects rather than when they see politicians making announcements. And if the election takes place in the late spring/early summer of next year, very few voters will have their shiny new broadband connections by then.

When the full, enormous cost of the broadband plan began to circulate around Government circles this time last year, there was genuine consideration given to dropping the project altogether and starting over. That was judged to be politically impossible.

Having decided to continue with the project, Ministers have resolved to throw their full weight behind it – despite the private reservations of several of them. Some still think it is a commercial gamble, and they know it is a political gamble.