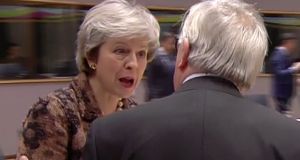 Theresa May took exception to Jean-Claude Juncker’s comments. Their exchange was captured on camera. “You called me nebulous!” she complained

The Government jet is out of action, so Taoiseach Leo Varadkar and his senior officials had to travel on the Aer Lingus red-eye on Thursday morning. There’s Leo, whispered Row Four. Leo was in Row Two. The Irish Times kept an eye on things from Row Three.

Fianna Fáil leader Micheál Martin was also on the flight, so naturally serendipity seated him beside the Taoiseach’s chief-of-staff Brian Murphy, to the amusement of everyone except the two men.

The Taoiseach was seated next to an elderly lady who had forgotten her medication. Airline staff were concerned about her, repeatedly asking was she able to fly without it. But luckily Dr Varadkar’s skills were not required. By the time the summit finished, it was the prospect of an orderly Brexit that needed first aid.

In the summit building a long red carpet leads to the entrance where EU leaders sweep past a throng of journalists and cameras, most stopping for a few words with their national media. Most of the questions were about Brexit. Most of the answers were the same: This is the deal. It will not be changed. The backstop stays.

Such was the level of support for the Irish backstop that Jean-Claude Juncker wore a green tie, officials said. Honestly.

Behind closed doors the Taoiseach was meeting with the British prime minister. It went on for longer than usual – 50 minutes, aides reported – but it was not, apparently, an easy meeting.

The two do not have brilliant relationship, to put it mildly. It did not improve on Thursday. Asked about it, Varadkar said some of Mrs May’s suggestions were acceptable, some weren’t. He didn’t elaborate.

Down on the floor of the cavernous atrium that serves as a gigantic press room for the occasion, summit junkie Nigel Farage, Mr Brexit himself, was dispensing wit and wisdom to all media comers.

Even the ebullient Farage seems to be getting tired of Brexit summits. Yet he kept his end up in a series of spirited interviews.

“What do you want, Nigel?” the BBC interviewer asked, almost plaintively.

The next bit of the conversation didn’t happen, but it’s the one that has been reverberating around British politics for two years, transfixing Westminster, gluing up its government, destroying its second prime minister now, reordering the landscape.

Outside the summit venue, at a safe distance a block away, protesters were having a sit-down protest against a lack of government action on climate change. It was a cold day for it.

Nearby Micheál Martin was doing the national interest thing, expressing firm support for the Government’s position in defence of the backstop. Micheál was anxious too to advertise his own credentials as a European statesman, having just come from the Alde group of European liberals (not to be confused with Aldi, another important European institution).

Micheál related that he was “meeting with the prime ministers of the Alde group, chaired by Mark Rutte there. From Holland. Four commissioners there. Vince Cable was there.” Not even the Liberal Democrats think Vince Cable is a big name.

Back inside things were taking a turn for the worse. Mrs May’s presentation to the 27 heads of government was not going well. They wanted to know two things, according to subsequent briefings – what did she want, and if she got it, could she get the treaty through Westminster?

Satisfactory responses to the questions were not, it seems, forthcoming. After Mrs May left the meeting, the EU 27 took out parts of the draft conclusions, including a promise to provide further help and clarifications to Mrs May – a move inevitably interpreted as an aggressive move in British reports.

At his press conference on Friday, Varadkar explained the move by saying the leaders felt there were enough assurances already for Mrs May. But the London Times quoted a senior EU official as saying that the UK needed to “feel the bleak midwinter”.

“The feeling is that EU leaders will have to do more for her!” bellowed one British journalist down the phone. That wasn’t the sense that they had. Not yet, anyway. The ebbing patience with the British is almost palpable in Brussels now

“This debate is sometimes nebulous and imprecise,” said Jean-Claude Juncker, European Commission president, at a post-summit press conference which took place after midnight on Thursday. “When it comes to the future relationship, our British friends need to say what they want, rather than asking us what we want.”

When they met again the following morning, Mrs May took exception to his comments. Their exchange was captured on camera.

“You called me nebulous!” she complained.

Junker explained that he was not talking about her, but rather about the British debate, and that in any case, his word was mistranslated. He meant the debate was nebuleux – foggy.

She accepted his explanation, but as an example of the British incomprehension of how the EU works, reaches decisions and sticks together it was pretty apt.

At her end of summit press conference, Mrs May was asked by one journalist if she ever felt like “throwing your phone in the bin and moving to a remote island”.

The ways things are going, that’s exactly what she will do.

The island is called Britain.