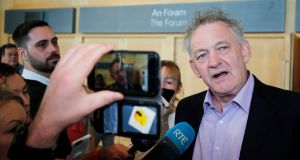 Presidential candidate Peter Casey sharply criticised what he described as a complete lack of detail in the review. Photograph: Nick Bradshaw/The Irish Times

Presidential candidate Peter Casey has described the breakdown of how President Michael D Higgins’s annual €317,000 allowance is spent as “self-promoting drivel” and “bullshit”.

Áras an Uachtaráin published a 48-page document this week entitled The Presidency in Review, which gave details of spending of the annual unaudited allowance by Mr Higgins during his first seven-year term .

The greater part of the glossy publication was comprised of photographs of Mr Higgins, with only three pages of details of spending under the allowance.

The breakdown discloses that the President spent just under €2 million of the allowance during his first term and returned €238,000 of unspent funds to the Exchequer.

Yesterday, Mr Casey, a Donegal-based businessman who finished second in the recent presidential election, sharply criticised what he described as the complete lack of detail under the headings, as well as the decision to publish it in a booklet that cost thousands of euro.

“It is 48 pages of self-promoting drivel,” Mr Casey told The Irish Times.

“It’s impossible reading through it to work out the figures. It’s a PR document. What’s the breakdown for these different expenses?

“All we needed was a three-page detailed document to show the breakdown of where the money was spent. This is just bullshit, for want of a better word.”

Mr Higgins, who was sworn in for a second seven-year term last month, came under pressure in the election campaign over the allowance.

It has been set at its current rate of €317,000 since the presidency of Mary McAleese in 1998. The annual expenditure is broken down into five categories. Three are under the broad heading of in-house events, and include food and beverage, hospitality and entertainment, and other, which includes fees for entertainers.

Another €170,000 has been spent cumulatively over seven years “representing Ireland abroad” but no further details have been disclosed as to how the funds were spent.

All the President’s foreign trips are separately funded by the Department of Foreign Affairs and costs associated with his travel abroad came to €667,000 in 2017.

The last category is “books and research”, which came to almost €40,000 over seven years.

There is a list on the following pages of the number of events associated with the first term in office including six incoming State visits, 52 themed garden parties, 22 afternoon tea events and 200 official lunches and dinners.

Mr Casey called for more detailed figures to be published and said this was not transparent. “There are huge numbers here but there is no breakdown. We get generic headings such as tea parties.

“Every quarter expenses should be published. He also spent over €100,000 on photographs and did not deny it during the campaign. That was a lot. His excuse was he could not get a local photographer.

“I am putting my expenses for the election into SIPO and every shilling and penny will have to be accounted for.

“Everything which was over €126, we have had to produce receipts. I have kept all the receipts.

“I want far more comprehensive governance of his office,” he said.

Fellow unsuccessful election candidate Gavin Duffy welcomed the setting up of a review group. “Citizens expect openness and transparency and full accountability as regards all spending of exchequer funds across all State entities including Áras an Uachtaráin. Hopefully this will be achieved by the annual publication of the promised Presidential review,” he said.

“The review must include itemised, spending details but should also try to establish value of the office for citizens by outlining the important work conducted by the office in the previous 12 months.”

The amount of the allowance returned by Mr Higgins is a little below that of Mrs McAleese, who returned €518,000 of the funds she did not use during her 14 years in office.

Efforts to reach other presidential candidates were not successful.

Majority of Covid-19 outbreaks in last week were in private houses 06:20
Science explains why your diet plan may not be working for you 06:00
Brown dwarf stars: What’s the weather like up there? 03:00
Metro South may be back on table as transport plans for Dublin are reviewed 01:55
‘Being in Ireland feels like winning the lottery’: Syrians arrive after delay due to Covid 01:45

1 Ireland could lose out as France lays claim to most of €5bn Brexit compensation fund
2 Miriam Lord: The Dáil's answer to John Wayne overcooks the ham slice, by slice, by slice
3 Majority of Covid-19 outbreaks in last week were in private houses
4 Q&A: What restrictions are going to be lifted next week?
5 Covid-19: Decision time on reopening plan as Varadkar questions cross-Border travel
Real news has value SUBSCRIBE