Patron of the organisation comments on child sex abuse scandal 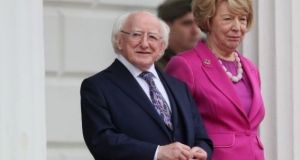 President Michael D Higgins’ spokesman said he “has been, and remains, concerned at recent reports in relation to the organisation”. Photograph: PA

President Michael D Higgins, who is patron of Scouting Ireland, has said he is “concerned” at the historic abuse revelations facing the youth organisation.

Scouting Ireland is in the midst of a major historic child sex abuse scandal. An ongoing internal review into past abuse has identified 317 alleged child abuse victims and 212 alleged abusers. The figures are expected to increase as more alleged victims continue to come forward.

“The President has been, and remains, concerned at recent reports in relation to the organisation...and has asked to be kept informed, as Patron, of the reforms that have been announced and any proposed actions in relation to the past,” his spokesman said. Mr Higgins has not commented on the matter until now.

On Wednesday, The Irish Times reported that evidence from the past review pointed towards the conclusion abuse had been “covered-up” and alleged perpetrators had been “protected” in past organisations.

Scouting Ireland formed in 2004, following a merger of two legacy organisations, the Catholic Boy Scouts of Ireland and the Scout Association of Ireland.

Chair of the organisation’s board Aisling Kelly told a meeting of senior scout leaders on Monday a picture was emerging of “extensive, prolonged, and at times organised child sexual abuse” from the legacy organisations.

Speaking in the Dáil on Thursday, Minister for Children Katherine Zappone expressed her confidence in the new board of Scouting Ireland, to deal with the “shocking and distressing” issue of past child abuse in the organisation.

She also told the Dáil that future funding of the scouting body would depend on the outcome of the progress report she has commissioned on its child protection reforms. The report from Scouting Ireland is due in late March 2019.

Previously Ms Zappone twice suspended the organisation’s State funding, worth €900,000 a year, over governance concerns. The organisation’s grant was restored in late October, after the entire former board stood down, and were replaced following elections at an Extraordinary General Meeting.

“I do have confidence [in the board]... I have witnessed what they’re doing in the short-term since they have taken on the leadership,” Ms Zappone told the Dáil.

The issue was raised by Fianna Fáil TD for Cork North-West Aindrias Moynihan, who had asked the Minister if she had confidence in the organisation and what her plans were for future funding.

1 Covid-19: One more death and 174 further cases confirmed in State
2 German nudist chases wild boar that stole laptop at Berlin lake
3 Midlands lockdown Q&A: Firstly, is it a lockdown or not?
4 Midlands lockdown: ‘Why shut down Offaly and leave Dublin open?’
5 Inside the dog-trafficking trade: ‘After drugs, it’s guns, then pups’
Real news has value SUBSCRIBE