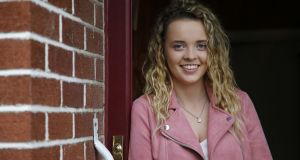 Rebecca Carter had sued the SEC, challenging its decision not to re-check her points score in time to allow her to obtain a place in veterinary medicine. Photograph: Nick Bradshaw for The Irish Times

The State Examinations Commission and the Minister for Education and Skills have appealed some aspects of a High Court judgment which allowed student Rebecca Carter take up a place at veterinary medicine at University College Dublin.

The outcome of the appeal will not affect Ms Carter’s place in UCD and she will not be liable for any legal costs incurred should the Court of Appeal find in favour of the State parties.

Ms Carter last September won her High Court case aimed at forcing the commission to rectify an error in the totting up of her Leaving Certificate marks before UCD closed its admissions for 2018.

He said the Minister and Department of Education should review the process to ensure all appeals were completed before the start of the academic year in 2019.

Ms Carter (18) of Ardcolm Drive, Rectory Hall, Castlebridge, Wexford, had sued the SEC, challenging its decision not to re-check her points score in time to allow her to obtain a place in veterinary medicine.

She had repeated her Leaving Certificate in order to get a place in the course, having just missed out on a place the year before.

The case was briefly mentioned before Mr Justice Mary Irvine at the Court of Appeal on Friday when Nuala Butler SC, for the Minister for Education, who had been let out of the case when it was heard last September, said the Minister wished to appeal certain parts of the judgment.

Counsel said the appeal was urgent from her client’s perspective and was seeking the earliest possible date.

Ms Justice Irvine listed the appeal for hearing in late May but added she was hopeful it may be heard earlier.

Ms Carter, represented by solicitor Eileen McCabe will participate in the appeal as legitimus contradictor or opponent to the State parties.

It is understood the student’s legal costs have been indemnified by the State appellants.