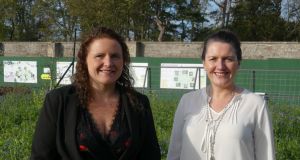 Alison Connolly and Dr Marie Coggins, both from the School of Physics at NUI Galway who carried out the research. Photograph: NUI Galway.

Professional horticulturalists and regular gardeners are not exposed to significantly high levels of the weedkiller glyphosate, a study by scientists at NUI Galway have concluded.

Glyphosate, which is one of the most common weedkillers in the world, was the subject of a major court case in the United States taken by a groundskeeper, Dewayne Johnson. He claimed he was dying of non-Hodgkin lymphoma as a result of exposure to pesticides including glyphosate. He was awarded $289 million in damages, but Monsanto, the company he sued, is appealing.

Health organisations are divided on whether or not glyphosate is a carcenogenic substance. The World Health Organisation’s International Agency for Research on Cancer classified it as a possible carcinogenic, but the European Food Safety Authority concluded that it was unlikely to be one.

The NUI Galway study set out to ascertain the exposure levels that professional gardeners and those who are regular amateur gardeners have to glyphosate.

Apart from collecting and analysing urine samples from workers the researchers also assessed the contribution skin contact and inadvertent ingestion makes to worker’s total exposure by collecting wipe samples from worker’s hands, and the area around their mouth. In addition, worker’s mobile phones and vehicle steering wheels were also wiped and protective gloves collected.

Some 200 urine samples and 350 wipes and gloves were collected and analysed over four years.

The end result found a very low level of exposure to the weedkiller. The highest measured exposure was just 1 per cent of the acceptable operator exposure level (AOEL) set by the European Food Safety Authority.

Results also suggest that skin contamination on the worker’s hands rather than respiratory inhalation is the most significant form of exposure accounting for almost 40 per cent of the total exposure.

The research was led by exposure science lecturer Dr Marie Coggins and Alison Connolly, a PhD researcher in exposure science, both from the School of Physics at NUI Galway.

Dr Coggins cautioned against the notion that there was no risk involved in low level exposure to glyphosate and said the area needed more research. She said the dangers of chemicals often do not reveal themselves without multiple studies first.

She said many gardening professionals wear all the equipment necessary to minimise the risk from pesticides and this may account for the low readings.