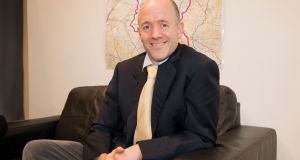 Dr Cathal Berry’s newly-opened campaign office in Newbridge has the air of a military command centre. In the middle of the room, a group are gathered around a table, discussing strategy.

Smaller groups are dotted elsewhere, all engaged in deep conversation. One wall carries an Ordnance Service map with the newly-enlarged Kildare South constituency marked in purple. “I did that myself, by hand,” Berry says.

There’s a reason for the somewhat martial atmosphere. Nearly everyone in the room is a former soldier, from sergeant to brigadier general. The few who are not are married, or related to soldiers.

Until late last year, Berry was a Defence Forces commandant. Once, he was second-in-command of the elite Rangers. When he retired, Berry, who is also a medical doctor, led the Military Medical School.

Now he is aiming to get one of the four seats up for grabs in Kildare South in next month’s general election. If successful, Berry will be the constituency’s first Independent TD.

All of Berry’s some 30 volunteers are political novices, including his director of elections Brian Dowling, a retired colonel and the Army’s former director of ordnance.

“I was volunteered for the role,” Dowling explains. It’s an army expression – you don’t volunteer, you are volunteered by someone else.” Like most people on “Team Berry”, Dowling had no political allegiances, until now.

Berry and his team are driven by the Defence Forces’ “intolerable” pay and conditions, and a lack of respect, they believe, by the Government towards serving members and their families.

This has driven the recruitment crisis, Berry says. Last year a record 850 personnel left the Permanent Defence Force, leaving it about 1,000 people below the establishment strength of 9,500.

Berry faces an uphill battle. Although Kildare South is now a four-seater he faces incumbents Martin Heydon of Fine Gael and Fiona O’Loughlin of Fianna Fáil.

The third incumbent, Fianna Fáil’s Seán Ó Fearghaíl, is guaranteed one of the four seats due to his role as Ceann Comhairle in the last Dáil.

Inexperience has led to one or two minor missteps. Sarah Walshe of the Wives and Partners of the Defence Forces campaign group had announced that she was running, ahead of Berry’s decision to contest.

But she quickly withdrew, pledging to fight for a Seanad nomination. Equally, Berry avoided problems when a US-based former officer donated €4,000, an unwitting breach of election rules. The money was quickly returned.

Despite inexperience, observers believe Berry has a good chance of picking up the last seat, not least because his online funding campaign has so far raised nearly €25,000. “And not all of it from military people,” says Berry.

Equally, Kildare South has soldiers. About 3,000 serving soldiers, many based in the Curragh, live in the constituency. There are even more families, plus retired soldiers, living in and around Kildare.

The question is whether they will vote. Traditionally soldiers do not, in large numbers, Berry concedes. “But they will turn out if you are motivated by someone.”

If elected as an Independent Berry will support a minority government if Kildare South gets “our fair share”. Would he take a position as Minister for Defence?

“It would be definitely something worth considering. I understand what is going on in the organisation at the moment. If you look at other countries, it’s the norm [to have former military members as defence ministers].

“Even if you look at Donald Trump’s original cabinet, there were four generals there who were the adults in the room,” Berry says. Trump soon got rid of all of them, he admits, but “who knows what they prevented?”

If a ministerial post does not arise, Berry believes that having an ex-soldier in the Dáil would benefit everyone: “There’s a complete absence of information there right now,” he says.

Such experience is not just to argue for better conditions for former colleagues, it is also about shaping future defence policy, says Deirdre Carberry, who until last month was an infantry captain with 15 years’ service.

She loved her time in the Defence Forces “and would recommend it anybody”, but she became frustrated by the lack of strategic thinking: “So it was time for me to try something else.”

Today, she is Berry’s communications director. Berry was brave, she argues, to resign from the Defence Forces to campaign for better pay and conditions. “He’s someone who stands for something,” she says.

Electing former soldiers is common elsewhere. Fifty-two Westminster MPs are veterans. Besides one or two former reservists, the Dáil has no veterans, “aside from maybe some of the Shinners”, jokes one of Berry’s team.

However, Berry is not “a one-trick pony”, cautions retired Brigadier General Ger Aherne quickly. Indeed, Berry’s primary target is the health service, something he has seen first-hand as a front-line doctor.

Irish patients could be treated in other European Union countries: “Ireland exports food because it has a surplus. Some countries have a surplus. We should be tapping into this, but nobody talks about it.”