Healthcare, housing and the cost of childcare are among the big issues in this campaign 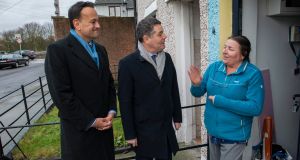 With 17 days to go until the general election, the following issues have become the hot-button topics on the doorsteps in the campaign.

Below is all you need to know about the issues and the pertinent question to ask candidates when they come knocking at your door.

The State’s health budget has risen to a record €17 billion, accounting for just over one in every four euro the Government spends day-to-day. Despite spending increasing by almost €4 billion since Fine Gael came to power in 2011, hospital overcrowding was the worst ever recorded in 2019 with 118,367 patients left waiting for a bed, compared with 86,000 when Fine Gael took office.

More than 553,000 people were waiting for an outpatient appointment in December, an increase of 37,000 on the previous year. A further 210,000 are waiting for inpatient, day-case or follow-on procedures.

Fine Gael is spending large sums to purchase private care for public patients. The party is banking on Sláintecare, the plan to remove private care from public hospitals that has cross-party support, to bring much-needed reforms to the health sector, but the plan has not been fully costed yet and delivery of the plan has been painfully slow.

Question to ask: how will your party reduce trolley numbers and hospital waiting lists?

The number of homes needed still falls drastically short of what is required in the market. A shortage of affordable rental accommodation has driven up rents and contributed to the homelessness crisis. There were 10,448 men, women and children in emergency accommodation in November, the 10th consecutive month that the numbers have been above 10,000.

Central Statistics Office data showed just over 18,000 properties were completed in 2018, but this is short of the estimated 35,000 properties needed every year to meet existing demand.

The Government has said that under Rebuilding Ireland, its five-year (2016-2021) plan to tackle the housing crisis, it has “delivered 64,000 new places to live” – a figure based on the CSO’s “new dwelling completions”. However, this figure includes almost 12,000 homes that were completed in unfinished housing estates or homes returned to use after being vacant for at least two years.

The latest progress report (to the end of September 2019) shows that the Government has delivered more than 90,000 homes since the last launch of the plan, but 64,388 homes were not new publicly owned homes but rented properties, using the private rental market to house people through the Housing Assistance Payment (HAP) or Rental Accommodation Scheme (RAS).

There were just 4,266 new social housing units built by local authorities in that same period. A further 18,107 were built or acquired through approved housing bodies or received from private developers under “Part V” obligations, that mean up to 10 per cent of a development must be social housing. Another 3,250 were leased.

This leaves about 22,000 to be provided by the end of next year to meet the Government’s target of 47,000 under Rebuilding Ireland, a highly ambitious gap to fill in that time.

In 2019, the average house price in Dublin reached more than nine times the average annual earnings, making homes in the capital unaffordable for many. Average rents have risen by 40 per cent since 2007, almost double the European average, exacerbating the housing crisis.

Question to ask: how will you solve the housing crisis and make homes more affordable?

Ireland is one of the most expensive places in the European Union when it comes to the cost of childcare. Ireland ranked third behind Switzerland and the UK, according to a European Commission study last year that put Irish childcare costs at an average of €771 a month.

Minister for Children Katherine Zappone released figures in May 2019 showing childcare fees averaging €184 a week – an increase of almost 4 per cent on a year earlier, ranging from €148 a week in Co Carlow to €251 a week in Dún Laoghaire-Rathdown, 70 per cent more expensive.

The childcare sector is struggling too: more than 25,000 people are employed in the sector and average pay for most workers is below €12 an hour; many earn below the minimum wage.

Question to ask: how will you reduce the cost of childcare?

The rising cost of insurance has forced the closure of some businesses and threatened the viability of others, particularly in the childcare, hospitality and leisure sectors, while also hurting consumers in their pockets. Insurers have been accused of excessive profit-taking as a Central Bank report last month showed that the cost of motor insurance claims fell by 2.5 per cent in the last decade, while premiums rose by 42 per cent. The report found that insurers made an average profit of 9 per cent last year, leading to accusations that customers were getting a raw deal.

Other insurance, such as public liability insurance for retailers and other businesses, has soared too, making this high cost a major election issue for both businesses and households.

Question to ask: how will you reduce the cost of insurance?

The growing, ageing population has created a pensions time bomb for this Government.

Retiring at 65 but being unable to claim the State pension for a few years has left many people signing on for Jobseeker’s Benefit or means-tested payments to bridge the gap until pension payments kicks in. To make matters worse, the Government has taken steps to provide a safety net for public sector workers, leaving the private sector exposed.

This will only become a bigger problem with the passing of time as the number of people at State pension age and older will more than double to 1.4 million by 2055.

Question to ask: how will you help retirees until their State pension kicks in?

The murder and dismemberment of Louth teenager Keane Mulready-Woods in the escalating gangland feud in Drogheda and the fatal stabbing of Cork Institute of Technology student Cameron Blair put crime high on the election agenda in the first week of the campaign.

In the same week, two men were shot and wounded in Sixmilebridge, Co Clare, two others were shot and critically wounded in St Margaret’s, north Dublin, and a man was beaten and set on fire after being doused in petrol in his home in north Cork.

These events come as many types of crime have been increasing for about two years after most crime declined in the decade of recession. All this has raised questions of whether the Government is applying sufficient resources and the correct resources into policing and criminal justice actions.

Questions also arise about whether early-stage offending, such as antisocial behaviour, is going unchallenged for lack of services, leading to more serious crime later.

Question to ask: how would you tackle crime differently?

Management of the economy

Fine Gael is playing up its stewardship of a strong economy, a budget surplus and record employment and landing punches on Fianna Fáil for being the party of “boom and bust” that ends in recession, emigration and unemployment. Fianna Fáil leader Micheál Martin has played this down, admitting that his party made mistakes but that the party laid the foundation for the economic recovery under plans started by the late Brian Lenihan when he was minister for finance.

Fine Gael has promised higher wages, tax cuts, record investment, and a bigger and better paid public service while maintaining a surplus in government spending. Fianna Fáil has accused Fine Gael of being good at spending money but not good at “getting value for money”.

Question to ask: in what areas will you spend money first and can you cut taxes as well?

Ireland was the third largest emitter of greenhouse gases per capita in the EU in 2017, according to a CSO report published last August. Emissions continue to rise, especially in transport and agriculture, unlike most other EU countries. This shows the ground the next government has to make up to tackle climate change. The State is far from meeting commitments to decarbonise the economy. There are political sensitivities here given that farming is the largest contributor to greenhouse gas emissions so the next government will have to work with farmers to find a fair transition to the changes that are needed to tackle climate change. Swedish climate activist Greta Thunberg has electrified the issue among young people creating another political pressure point.

Question to ask: how are you going to meet our climate commitments?

Almost 200,000 commuters, about one in 10, spent an hour or more commuting to work in 2016 with an average travel time of 74 minutes. This was up almost 50,000 in five years. Almost half of that group were aged between 30 and 44, an age group where many have young families. This makes quality of life issues a major issue for people who are juggling work and family and spending hours in a car, bus or train every morning and evening heading to and from work.

The highest percentage of commuters were in the Dublin commuter belt in Co Meath, north Co Dublin, Co Kildare and Co Wicklow, making transport a key issue in those constituencies in particular.

Investment in sustainable public transport will be seen as not just improving the lives of the growing commuting population but also help to reduce carbon emissions in the climate fight.

Question to ask: how are you going to make life and travel times easier for commuters?

Irish beef prices are leaving farmers struggling to make ends meet, prompting angry farmers to take to the streets and block traffic in and around Dublin with the tractor protests. Tackling climate change will further hurt the economic livelihoods of farmers as the next government must attempt to reduce carbon emissions, which affect the agricultural sector the most.

The farmer protests coincide with concerns in rural communities that an uneven economic recovery has left behind parts of the country. CSO data published last month showed that people living in “highly rural/remote areas” had the longest average distance (45km) to travel to a hospital adult emergency department, compared with the country’s average of 20km. They also had to travel the longest average distance (7.1km) to reach a public bus stop. The “highly rural/remove areas” population was the only area to show a decline in numbers.

Question to ask: how are you going to help rural communities?

Fine Gael has attempted to put Brexit front and centre in the election campaign given the party’s role in the negotiations leading to a deal between the UK and EU that will avoid a crash-out Brexit on January 31st. Painting this milestone as “half-time” in the Brexit process ahead of tricky negotiations on a trade deal, Leo Varadkar and his party are attempting to play up their own experience to handle the next phase of Brexit and to cast Fianna Fáil as a party that cannot be trusted on this. Brexit has not yet emerged as a significant issue in the campaign. This may change when the UK’s departure becomes more significant in the news agenda in and around January 31st.

Question to ask: how can you ensure Ireland’s voice is heard in the noise of the trade talks?