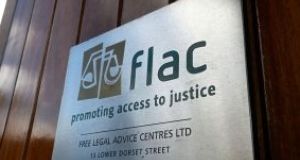 General election candidates have been called on to commit to increased resources for civil legal aid as well as to support a “root and branch review” of the system.

Flac (Free Legal Advice Centres) chief executive Eilís Barry said it will be publishing on its website a list of those candidates who signed its pledge to support more resources, a review of the system, and improved family law court facilities.

“The current civil legal aid system is under-resourced, stretched to capacity, and excludes a number of critical areas of law,” Ms Barry said.

It is separate from the State-operated Legal Aid Board which provides civil legal aid to people on low incomes. However, the threshold for qualifying for the State system is quite low.

“We provide legal advice to people on housing and social welfare issues and those facing evictions or discrimination, because they cannot afford to pay for it privately and they cannot access it through [State provided free] legal aid,” Ms Barry said.

“We desperately need an overhaul of the means test [for the free legal aid scheme],” she said.

“Many people on low incomes, or very low disposable income due to indebtedness, are refused [free legal aid].”

Flac, unlike the Legal Aid Board, rarely represents people in court, though it does sometimes get involved in litigation in order to test the law or in the hope of creating new legislation.

Due to the limitations of the legal aid system, “the door to justice is shut” for many people, Ms Barry said.

In 2018, Flac was contacted 25,000 by people seeking legal information and advice.

Housing and discrimination featured strongly in the cases the network was involved with during the year.