Taoiseach urged by NI figures to act over ‘offensive’ Brexit 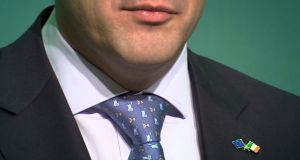 Taoiseach Leo Varadkar wears a lapel emblem with both the EU and Irish flags at the Government Press Centre in Dublin. Photograph: Bryan O’Brien

More than 200 figures from Northern Ireland society have written to Taoiseach Leo Varadkar warning that the UK’s split from Europe is offensive and unacceptable.

Among the names from the world of sport, the arts, business, community work and the legal sector are Republic of Ireland footballer James McClean and Queen’s University Professor Phil Scraton who campaigned to exposed the Hillsborough disaster.

The group described themselves as Irish citizens and criticised the near year long deadlock at Stormont.

“The impending reality of Brexit now threatens to reinforce partition on this island and revisit a sense of abandonment as experienced by our parents and grandparents,” they said.

“The fact that a majority of voters in the north of Ireland voted to remain within the EU must not be ignored.

“Against the stated will of a majority of voters in the north, and notwithstanding recent announcements, Brexit pushes us all into unchartered territory, with huge uncertainty for business and the economy, and continuing doubts about what this will mean in reality for Irish and European citizens living in this region.

“We, our children and grandchildren should not be forced out of the EU against our democratic will.

“All of this is offensive and unacceptable to us and many others.”

Other signatories included Olympic boxers Michael Conlan and Paddy Barnes and solicitor Darragh Mackin of KRW Law, whose work helped secure the release of Ibrahim Halawa after four years in jail in Egypt.

They attacked British prime minister Theresa May’s pact with the DUP and said it has become a grave threat to political progress.

“We appeal urgently to you, Taoiseach, and to the Irish Government, to reassure us of your commitment to stand for equality and a human rights based society and your determination to secure and protect the rights of all citizens in the north of Ireland,” they said.

The signatories said the institutions established under the Belfast Agreement have seen a concerted undermining in recent years and that the London and Dublin governments have taken a laissez-faire approach to the 1998 accord.

“Despite the British government’s co-equal and internationally binding responsibility for overseeing the peace process with the Irish Government, we have no confidence in its commitment to do so with impartiality or objectivity,” they said.