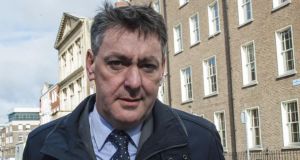 Fianna Fáil TD Billy Kelleher: he says terminations should be provided in certain circumstances, such as fatal foetal abnormalities, incest, rape and when there is a risk to a woman’s health. Photograph: Brenda Fitzsimons

The Oireachtas committee examining the Eighth Amendment of the Constitution is nearing its final conclusions – but a consensus is far from clear.

The 20-member committee has spent the past three months hearing from experts, and will vote on its final report, which must be submitted to the Dáil by December 20th.

There is seemingly one thing all members agree on and that is the necessity to hold a referendum on article 40.3.3. However, there is a clear divergence of views on whether the Eighth Amendment should be deleted from the Constitution, retained or amended.

The amendment, which inserted the article into the Constitution in 1983, guarantees to protect as far as practicable the equal right to life of the unborn and the mother.

The committee will be asked to assess the 13 proposals emerging from the Citizens’ Assembly, which proposed terminations in a range of cases, including up to 12 weeks without reason.If they accept members must then consider if they believe the gestation time recommended by the assembly to be appropriate.

The committee members have until Friday to submit any amendments.

While division lines remain, several members appear to be in favour of introducing legislation for abortions in certain cases.

Fianna Fáil TD Billy Kelleher said his party has a vote of conscience on the matter, but he believes terminations should be provided in certain circumstances, such as fatal foetal abnormalities, incest, rape and when there is a risk to a woman’s health. “The question then becomes how do you legislate for that, and that is going to be a significant challenge for the Government.”

His party colleagues Lisa Chambers and James Browne are less clear, and both said they had not yet made up their minds on how they would vote.

Sinn Féin TD Louise O’Reilly said her party had adopted a policy to allow for terminations in the cases of rape, incest, fatal foetal abnormalities and when a mother’s health is at risk. She did not envisage the party supporting any other circumstances.

Labour’s Jan O’Sullivan said her party had adopted a similar position to Sinn Féin in 2015, but, having listened to the evidence at the committee, she believed it was time to go further.

She said she believes the party should support terminations without exception up to 12 weeks. “We heard that men and women are getting abortion pills online anyway, and we cannot ignore that fact. We need to examine this area, and I will be raising that with the party ahead of the votes next week.”

Social Democrats TD Catherine Murphy shared this view, but warned exception-based legislation would be difficult to introduce. “How do you legislate for rape, what is the burden of proof? Do you risk re-traumatising a rape victim? These are very difficult questions to answer.”

There are also a number committee members who feel there should be no change to the Constitution, including Independent Senator Rónán Mullen, Independent TD Mattie McGrath and Fine Gael TD Peter Fitzpatrick.

Fine Gael he TD Bernard Durkan said he was not in favour of abortion but believed it should be allowed in certain circumstances.