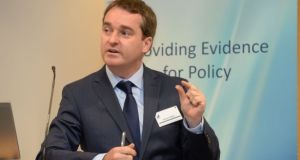 Mr Watt, who has been secretary general of his current department since its creation in 2011, will take up the reins at the Department of Health with immediate effect.

The Cabinet is expected to approve the move at its meeting tomorrow.

Mr Watt brings a formidable reputation as a reformer to the troubled Department of Health, having steered many tough public sector reforms on work practices and pay through during the period of the Fine Gael-Labour coalition 2011-16.

He previously worked as an assistant secretary in the Department of Finance when the late Brian Lenihan was Minister for Finance during the financial crisis.

Unlike many senior civil servants, Mr Watt has experience in the private sector, having worked for Indecon Economic Consultants for a period after beginning his career in the Department of Finance.