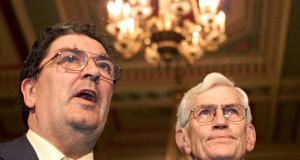 SDLP leader John Hume with party colleague Seamus Mallon. Hume was concerned that the British government, particularly in the run-up to the Westminster general election, would be ‘unable to engineer forward movement’. File photograph: Reuters

A behind-the-scenes initiative by SDLP leader John Hume to attempt to restore the 1994 IRA ceasefire, using the medium of Protestant Church leaders, is detailed in previously confidential files. *

The Hume initiative is described in a note of January 6th, 1997, by Sir John Chilcot, head of the Northern Ireland Office (NIO). This was almost a year after the breakdown of the first IRA ceasefire at Canary Wharf in London on February 9th, 1996.

In his memo, circulated to the then northern secretary Patrick Mayhew, ministers and officials, Chilcot wrote: “I spoke to John Hume over the weekend after he had left word that he would like to talk . . . Hume’s main point was that he was trying to start a fresh initiative to help bring about an IRA ceasefire, using the medium of Protestant Church leaders.”

While the SDLP leader did not wish to name them on the telephone, Chilcot felt the NIO might assume that they were “the same group whose work has been signalled to us in strict confidence”.

According to the memo, released today with scores of other files by the Public Record Office in Belfast, Hume realised that his “Hume/Adams text” of October 10th, 1996, had no future following a statement by British prime minister John Major. Chilcot believed that Hume “was showing a high degree of realism, given the impracticability for the Ulster Unionists of making forward movement in present circumstances”.

The SDLP leader said that he had been disappointed by this, particularly on the decommissioning issue and in the bilateral discussions at the Stormont talks between the SDLP and the Ulster Unionists, but he had seen David Trimble [the UUP leader] having to harden up his position for reasons that everybody can understand, even if they might not like it or sympathise with it.”

In Hume’s view, this left the British government, particularly in the run-up to the Westminster general election “unable to engineer forward movement”.

As a result, Hume told Chilcot, his hope was that he could work out a completely fresh text with and through “the Protestant Church group, secure Unionist endorsement for it and then, if all went well, launch it after careful consultation with the [British and Irish] governments and though he did not say so, no doubt, Gerry Adams”.

Chilcot expressed the hope to the SDLP leader that there would be “no repeat of the process that had ended in tears before Christmas”. This was clearly a reference to IRA proposals in late November 1996 suggesting Sinn Féin’s immediate admission to talks after a renewed ceasefire –but without decommissioning.

Major had responded to the IRA proposals in the Commons on November 28th, 1996, by saying that the British needed to see “an unequivocal restoration of the ceasefire” and an assurance that Sinn Féin would sign up to the Mitchell Principles on democratic and peaceful means.

The NIO chief impressed on Hume that, if he was minded to pursue any such initiative, he would need to ensure that any text was acceptable to the Ulster Unionists as well as the British government “if he was to avoid making a bad situation worse”. The SDLP leader said his great concern was that the period between in the run-up to the British general election was one of self-evident fragility in terms of IRA and loyalist terrorism. Asked if he had told “Number 10” about his initiative, Hume replied he had not, so far. Chilcot suspected he had felt “rebuffed” following his last attempt.

Other files show that inter-party talks, security and the issue of contentious parades dominated discussions at a final meeting of the Anglo-Irish Intergovernmental Conference in Dublin in March 1997.

The conference, established under the 1985 Anglo-Irish Agreement, was attended by Mayhew and his NIO ministerial colleagues, Michael Ancram and Baroness Denton, on the British side, and tánaiste Dick Spring, minister for justice Nora Owen and taoiseach Enda Kenny for the Irish government.

On the issue of the multiparty talks, Mayhew said the British government believed that the best prospects for success lay in keeping the parties around the table on the basis of the compromise suggested by US senator George Mitchell [the talks chairman]. He detected a tendency among some unionists to seek an escape from the three-stranded process but felt they would remain in the talks.

Discussion turned to the framework documents, issued by taoiseach John Bruton and Major in 1995 proposing a 90-member assembly with all-party committees and North-South institutions. Unionism had rejected the document. Mayhew believed that the key to the future of the NI talks process lay in the participants developing confidence.

Turning to confidence issues, Spring voiced concern about the forthcoming deployment of the Parachute Regiment in east Tyrone. Regarding contentious parades, Spring recalled Irish disappointment that the recent recommendation for an independent parades commission had not been implemented.

Responding, Mayhew reported a disturbing hardening of positions. He had seen the Garvaghy Road residents with Hume and [Bríd] Rodgers [SDLP]and welcomed Hume’s engagement. However, he had gained no indication of willingness to move from the principle of “No Orange feet on Garvaghy Road”.

RUC chief constable Ronnie Flanagan informed the meeting that he had had a range of negotiations with the main institutions involved. However, mediation had become difficult following the revelations about Sinn Féin activity on an RTÉ Prime Time programme [when Gerry Adams had claimed that Sinn Féin had been proactive in the protests of local residents’ groups].

Another issue raised at the conference was the imprisonment on remand of Róisín McAliskey, the pregnant daughter of the former Civil Rights MP Bernadette Devlin-McAliskey. German police had requested the extradition of Róisín McAliskey in connection with an attack on Osnabruck army barracks in June 1996.

The tánaiste welcomed the recategorisation of McAliskey in Holloway Prison from the high-risk status that had placed harsher conditions on her detention. He emphasised the negative impact her case was having on the nationalist community. The Northern secretary recognised the damage being caused by her case.

Owen said she appreciated the seriousness of McAliskey’s alleged offences but there was a danger of a “Joan of Arc” figure being created.

The files from 1997 also show repeated efforts were made by the Irish government to obtain a fresh judicial inquiry into Bloody Sunday.

The tánaiste raised the issue at the Anglo-Irish conference, saying the Irish government believed that the further material now available undermined the findings of the Widgery review into killings at the civil rights march in Derry in 1972. Mayhew said that the dossier of material provided by Hume had been scrutinised.

Following separate submissions through the Joint Anglo-Irish Secretariat at Maryfield, Mayhew said no options had been ruled out and if there was new evidence “appropriate action will be taken”.

The Bloody Sunday inquiry, under its chairman Lord Saville, was eventually established in 1998 by then British prime minister Tony Blair. Its report was published in June 2010 when David Cameron apologised on behalf of the British government.

Dr Éamon Phoenix is a political historian, journalist and broadcaster. He is a member of the Taoiseach’s Expert Advisory Group on Commemorations.