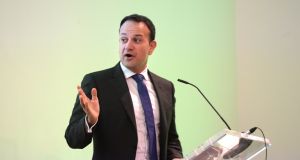 Taoiseach Leo Varadkar: The Government is facing a motion of no confidence in Minister for Housing Eoghan Murphy in the Dáil on Tuesday. Photograph: Dara Mac Dónaill

Taoiseach Leo Varadkar faces growing fallout from Fine Gael’s defeat in four byelections amid pressure from within the party to remove Verona Murphy from the Wexford general election ticket.

The Government is also facing a motion of no confidence in Minister for Housing Eoghan Murphy in the Dáil on Tuesday.

Several senior party figures said on Sunday that they expect Ms Murphy to be deselected as a candidate after a campaign in Wexford which caused deep unease throughout the party.

Ms Murphy raised concerns about asylum seekers, citing the influence that violent Islamic fundamentalists might have on their numbers, including on young children.

While she subsequently apologised, a campaign video she posted last week in which she complained of “character assassination in the media” has caused alarm in Fine Gael.

The video was disavowed by both the Taoiseach and Minister for Finance Paschal Donohoe. A party spokesman said it was not “endorsed, approved or supported by Fine Gael” .

A large number of Ministers, TDs and officials who spoke to The Irish Times on Sunday said they wanted and expected to see Ms Murphy removed as a candidate. TDs said they had been encouraged not to speak publicly on the subject.

Several other senior party figures said she should be removed because her comments conflicted with Fine Gael’s values.

It is also widely expected the party’s unsuccessful candidate in Fingal, Dr James Reilly, will be removed from the general election ticket after he came in fourth in the count.

Speaking at the Dublin Mid-West count, Mr Varadkar said: “It’s the normal course of events that after a byelection we carry out a review of each contest and review the ticket on that basis.

“So it’s always in the power of our executive council on my recommendation to add candidates or delete candidates,” he told reporters at the count in Adamstown.

Mr Varadkar had said Fine Gael’s target was to win one of the four byelections held on Friday, but his candidates failed to achieve even that modest target.

The poor election results come ahead of a Dáil motion of no confidence in Minister for Housing Eoghan Murphy. With Fianna Fáil planning to abstain on the motion, the Government will need the support of Independent TDs to avoid defeat.

While TDs Michael Lowry, Noel Grealish, Peter Fitzpatrick, Michael Harty and Denis Naughten normally abstain or support the Government, none would confirm on Sunday night which way they intend to vote.

Fine Gael expects Cork TD Dara Murphy to be present to vote on Tuesday evening despite his imminent expected departure from the Dáil to take up a position in the European Commission.

Mr Murphy has been heavily criticised for claiming Dáil attendance expenses in recent years while employed by the European People’s Party in Brussels, and when he was frequently absent on European Parliament business.