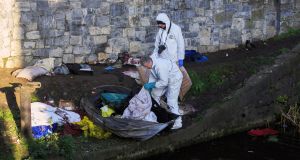 Gardaí attend the scene of an incident in which a homeless man was injured, along the Grand Canal in Dublin’s city centre. Photograph: Gareth Chaney/Collins

Taoiseach Leo Varadkar has been accused of politicising a serious incident in which a homeless man was injured, after the Taoiseach called on the Fianna Fáil Lord Mayor of Dublin Paul McAuliffe to make a statement on the matter.

The man suffered serious injuries when an industrial vehicle with a mechanical arm removed his tent from the banks of the Grand Canal in Dublin during a clean-up operation. The crew was not aware the man was sleeping in his tent at the time. He remains in a serious but stable condition in St Vincent’s hospital.

Speaking after Fine Gael’s election launch in Monaghan, Mr Varadkar said he was “concerned” about the incident and called on Mr McAuliffe to make a statement on it.

Mr McAuliffe is a Fianna Fáil general election candidate in Dublin North-West, where he is expected to challenge for the seat of Fine Gael’s Noel Rock. His role as lord mayor is an honorary rather than executive one.

Mr Varadkar later denied that he had attempted to make the incident political.

“No, I didn’t mention blame at all,” he told reporters. “I think it is reasonable that the Lord Mayor of Dublin, who is politically accountable for Dublin City Council, should also make a statement. I am sure he would be willing to do that.”

In another clarification on Wednesday night, during the visit to Ireland of European Commission president Ursula von der Leyen, Mr Varadkar said: “In terms of what the lord mayor has to say, I have never sought to make homelessness a party political issue. It is a very complicated social issue that every country struggles with. I have never sought to make it a party political issue and I think, if anything, we have been on the receiving end of that rather than the perpetrators of it.”

“It is not how I would do politics,” he said.

Mr McAuliffe said he was “disappointed that the Taoiseach went down this road today”.

“A man was seriously injured and yet An Taoiseach appeared to be more interested in apportioning blame to someone else . . .” he said. “There may be an election ongoing at the present but a human being has been seriously injured this morning.

“That was my first concern when I heard about it, and I wanted to find out the details and so I have asked for a full report. It seems that the Taoiseach’s first thought was to play a political game.”

“We see tents all over the city in recent years. It’s scandalous in itself. But for a man to be injured while he’s sleeping in his tent just because people want to clear the streets, somebody has to answer for this,” he said.

“This situation is horrendous. I think there needs to be serious questions asked about this. It is reprehensible that it [the tent] wasn’t checked first,” she said.

Minister for Housing Eoghan Murphy said he was “saddened” to hear of the incident.

“My thoughts are with this poor man as he recovers in hospital. I’ve demanded a full report in to the incident which is under Garda investigation,” he tweeted, adding that a campaign poster he had placed on Leeson Street Bridge near the scene of the incident had been removed.

Green Party councillor Neasa Hourican said she had written to Dublin City Council chief executive Owen Keegan and Mr McAuliffe to request an emergency meeting. “We want to discuss the clearance action at the canal and our concerns for the safety of rough sleepers in the city,” she said.