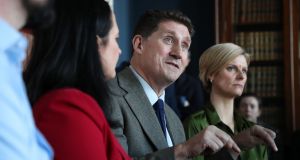 Green Party Leader Eamon Ryan TD at the launch of the party’s campaign for the general election. Photograph: Nick Bradshaw / The Irish Times

It will take “at least a decade” to turn Ireland from a laggard to a leader in terms of responding to climate change, Green Party leader Eamon Ryan has said.

He said he was “not worried one bit” about recent comments from Minister of State John Paul Phelan, who described some members of the Green Party as “nutters”.

Sources said Mr Phelan criticised the Green Party’s record on climate change during its term in office at a recent dinner and also attacked some sections of the party.

Ms Martin said the Green Party would be campaigning with “a message of positivity” and “that sort of language that was used by a Government Minister is not the type of language that should be used in any campaign”.

“I think that kind of disrespectful campaigning is actually what would turn voters off, and have the opposite effect.”

Mr Ryan said all of the political parties need to be asked over the course of the campaign if they are “serious” about implementing green policies.

“We heard the Taoiseach last Sunday on radio for an hour and I don’t think the issue of climate change was mentioned once. At some stage in this election the other parties will and should be asked the question, are you really going to go green,” he said.

“This election is about the decade ahead, not just the next four or five years. But I think the Irish people are ready to do it, want to do it.”

Mr Ryan also said that spending earmarked for large-scale road projects should be diverted towards public transport. “Let’s use that in public transport instead, let’s just think big and be really ambitious,” he said.

“Are we willing to make changes that are difficult? Because it won’t be easy. Everyone loves the ‘oh we are spending here, we are spending on roads everywhere’. Politically that has always done well in this country. But are we going to be saying it actually requires different prioritisation, and it requires prioritising cycling, walking, and public transport, a radical switch in that direction.”