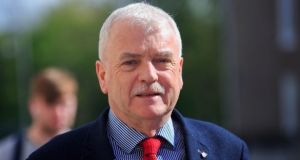 Finian McGrath, Minister of State for Disability Issues, has confirmed he will not seek re-election. Photograph: Gareth Chaney/ Collins

Finian McGrath, the Dublin Bay North TD and Minister of State for Disability Issues, has confirmed he was will not seek re-election.

Mr McGrath, who was first elected in 2002 and has been returned at every election since, made the announcement just after Taoiseach Leo Varadkar confirmed the date of general election as February 8th.

Before his election as a TD, he was a councillor on Dublin City Council. Although he was known in recent days to be weighing up retiring from political life, his announcement still came as a surprise.

He has served as Minister of State for Disability Issues since entering coalition with Fine Gael along with his Independent Alliance colleagues after the 2016 general election.

In a statement, Mr McGrath said: “I have given this matter careful consideration and believe this is the correct decision for my family and me. I am far from retiring and will remain involved in political activism, supporting disability issues.

“I have successfully contested four Dáil elections and one city council election and my political record shows that I have been radical, pragmatic, open and always willing to take responsibility to serve my constituents. I am proud to have negotiated Programme for Government agreements with four different Taoisigh during my 21 years in public office (1999-2020). In 2016, with the support of my election team and my Independent Alliance colleagues I made the decision to become a member of Government and more significantly to sit at Cabinet as Minister for Disabilities.”

Minister for Communications Richard Bruton, Mr McGrath’s Dublin Bay North constituency colleague, said he had “served our constituents well and been great to work with in and out of government”.

“His big heart, his playful personality, and his huge commitment enlivened many a cabinet meeting,” Mr Bruton said. “As the first ever Minister for disabilities, he brought a real change to people’s lives. He was always a loyal colleague and at all times treated both supporters and opponents with fairness and respect.”

While Mr Halligan has not yet confirmed that he will not stand again in the Waterford constituency and has been unavailable for comment, Mr Ross said on Tuesday “I am very, very sorry that Finian McGrath and John Halligan are not standing, but come polling day Independents will be very strong again”.

With Kevin “Boxer” Moran leaving the Independent Alliance, it means the grouping, which also includes Mr Ross, has effectively come to an end.

Other TDs who had already announced they will not be seeking re-election to the 33rd Dáil include former Taoiseach Enda Kenny, former minister for finance Michael Noonan and ex Sinn Féin leader Gerry Adams.

Meanwhile, there was also surprise that Independent Senator Michael McDowell said he will not stand for the Dáil in the general election but will seek re-election to the Upper House.

He said “the Seanad needs independent voices and it needs to be independent of government domination to perform its valuable constitutional role of check and balance on the power of the party whip, as was demonstrated by the success of those who have prevented the enactment of the unwanted and unwise Judicial Appointments Commission Bill”.

Mr McDowell led a Seanad filibuster against measures to reform judges which have been championed by Mr Ross but which failed to pass all legislative stages and will now fall. Mr Ross, however, said they can be picked up by the next government.

Speculation was rife that Mr McDowell might run in his old Dublin Bay South constituency. He has twice been elected to the Dáil and served as minister for justice and Tánaiste as well as leader of the then Progressive Democrats party.

In response to the announcement from Mr McDowell, Minister for Justice Charlie Flanagan, who has sat through the Seanad filibusters, said: “I note McDowell has rejected my challenge to stand for the Dáil. I concede however his record filibuster on judges Bill seems to have succeeded.”

TDs confirmed so far to be not seeking re-election: