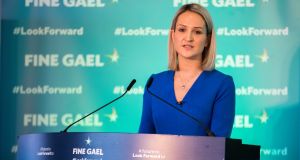 On May 8th, 2015, Britain woke up to a surprise Conservative majority, and the end to the Liberal Democrat-Conservative coalition years.

Fine Gael were clearly impressed by David Cameron’s campaign, majoring on economic progress and a long-term plan with the slogan: “Let’s stay together on a road to a stronger economy.”

In June that year Fine Gael strategists met Conservative counterparts in London. On February 2nd, 2016 Enda Kenny revealed Fine Gael’s slogan for the 2016 general election in Ireland: “Let’s keep the recovery going.” The similarities are hard to put down to sheer coincidence .

But Fine Gael’s slogan was roundly criticised: it focused on the recovery in the abstract, with little acknowledgment for the human stories; it failed to recognise that many hadn’t yet felt the effects of this so-called recovery; recovery? What recovery?

This time around, Fine Gael have landed on something more vague. Emblazoned across their candidates’ literature is the forgettable: “A future to look forward to.”

In what appears to be an attempt to avoid a similar PR nightmare of 2016, Fine Gael seem to believe that opting for something unmemorable is a better option than being memorable for all the wrong reasons.

But as we learned from the Tories in 2019 with the “Get Brexit Done” slogan, leaning on the specifics can work, and lend an indispensable discipline to the party’s messaging.

The Tory mantra focused the electorate’s thinking, reminding them of the precise reason to vote Tory: “I’m voting Tory because I’m sick of hearing about Brexit, I just want to get it done”, so the Tories’ imagined voter might say.

It also worked as a slogan (whether misleading or not) because it denied territory to Labour. It positioned the Tories as the one true party of leave (The Brexit Party’s time in the spotlight was but a flash in the pan).

The broader lessons from Britain in 2019 are stark. The Conservatives succeeded where Labour failed

Johnson outstripped Labour with ease, reminding voters that Jeremy Corbyn and his team could not make up their minds on Brexit for months and eventually opted for a policy that alienated leave and remain voters alike.

“Get Brexit Done” not only pointed to the mess Labour had made of the defining policy area of the past three years, but it also calmly instructed voters that a vote for Labour would allow Brexit to remain undone – dragging on, perpetuating the infighting, indecision and delay that had characterised the previous parliament. Mostly it was popular because it made it very clear what a vote for the Conservative party meant.

In Ireland, as reports from the candidates’ experience on the doorsteps come trickling in, Fine Gael’s recent record on housing is revealing itself to be one of the biggest bugbears for Leo Varadkar’s electoral hopes.

While housing policy may not have dominated Irish political discourse to the same extent as Brexit did in the UK – it has undeniably been a central theme for some time now.

Perhaps Fine Gael took the wrong lessons from Cameron in 2015, and are wary of doing so again. But there’s something valuable to be taken from the Tories win this time around. The success of the myopically specific “Get Brexit Done” mantra lends credence to the idea that perhaps a better slogan for Varadkar et al would simply be “build more houses”.

The broader lessons from Britain in 2019 are stark. The Conservatives succeeded where Labour failed, thanks to designing the election on their own terms, casting it as a vote entirely premised on Brexit, no matter that Labour tried – and failed – repeatedly to drag it in any other direction.

While nearly every Tory candidate’s broadcasts on social media ended with the repetition of the well-worn “Get Brexit Done” mantra, Labour confused the electorate with a deluge of policy announcements that became impossible to keep track of. With Labour it became clear that voters simply didn’t know what they were getting.

The make-up of the Dáil will never resemble anything like that of the House of Commons thanks to the vagaries of the first past the post system in the United Kingdom.

But election campaigns are still trying to do similar things. And if there is anything to be taken from late 2019 in the UK it’s to stay on message, fight on your own terms, and let people know precisely what they’re voting for.