Labour eager to ‘solve the problems that beset working people’

Party says economic growth is strong enough to see extra spending of up to €4.4bn a year 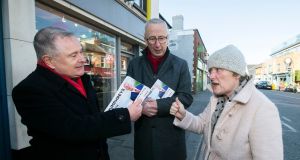 The Labour Party says it will look for additional spending of between €2.9 billion and €4.4 billion annually to boost public services after the election as Fine Gael’s promise of spending up to €2 billion a year more is not enough.

Party leader Brendan Howlin, a former minister for public expenditure, said expected economic growth over the next five years of between 2.5 per cent and 3 per cent would make resources available to “solve the problems that beset ordinary working people right now”.

He said Labour is “not a debating society” but a political party seeking to get problems fixed and any decision to go into coalition with Fianna Fáil or Fine Gael after the election would be done on the basis of the programme for government alone.

He ruled out significant tax cuts if the party formed a coalition with Fine Gael and said the money would be better spent on public services.

“People want a health service they can depend on. Nobody is proud or satisfied of the health service where there are 760 people on trollies in the last week or so,” Mr Howlin said.

Labour held a photocall outside the Irish Glass Bottle factory site in Ringsend, Dublin on Wednesday. The site was first bought in 2006 for €412 million by a consortium. The related loans were later acquired by Nama.

Mr Howlin was accompanied by Senator Kevin Humphreys, who is standing in Dublin Bay South which will be one of the most keenly contested constituencies in the country.

Mr Humphreys said the site was in “Minister [for Housing] Eoghan Murphy’s own back garden” and he blamed Fine Gael for the lack of progress in developing it.

“We have a site, we have planning permission, but nothing is happening,” he said, adding that it was an example of a “lack of prioritisation of housing” in the Fine Gael government.

The 15-hectare site is capable of delivering 3,500 homes of which 900 are to be social and affordable housing.

“There is disbelief and distrust from the local community. There is frustration that there is a big empty site here that can provide 3,500 homes and it has not been prioritised for four years,” he said.

“There was an expectation that we would see cranes on site after two years. We are now in 2020 and still nothing has happened.”

Mr Howlin said the Ringsend site showed there was “no palpable will, no determination” on the part of the Government to fix the housing crisis.

He defended Labour’s performance in government when it held the housing portfolio between 2014 and 2016, saying the then minister Alan Kelly allocated €2.9 billion in the “worst of times” to social and affordable housing.

Mr Howlin stressed that Labour would commit to building 80,000 social and affordable homes if it is in coalition after the next election at a cost of €16 billion.

He maintained the prospect of sharing government with Sinn Féin is not “something that we can entertain” and he echoed Fianna Fáil leader Micheál Martin’s views that the party was too close to former IRA men to serve in government.