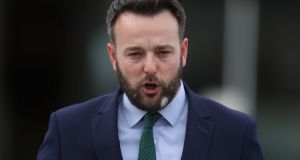 The SDLP is to create a forum to discuss future constitutional arrangements on the island of Ireland.

The New Ireland Commission will seek to contribute to the conversation around Irish unity by engaging with people from all political backgrounds across Ireland, including unionists, and aims to publish detailed research outlining what a united Ireland might look like.

The commission will be run “by and for” the SDLP, and its findings will influence the party’s position and its contribution to the shared-island unit in the Department of the Taoiseach.

“It is clear things are changing,” SDLP leader Colum Eastwood said, “and I believe those of us who are going to be affected most by that change – in other words, people living on this island, whether you’re British or Irish or unionist or nationalist – have to be involved in building and co-designing that change.

“The ideal scenario would be that people from all backgrounds would come together and have those discussions.”

The work of the commission will be based around three panels, which will seek to foster wider discussions through a variety of engagements and events. These will comprise a so-called “elders” panel of experienced people “who have contributed to building a new Ireland based on mutual respect and agreement over a long period of time”, a panel of young people and one of experts in fields including health and the economy.

Whilst Mr Eastwood, who is in favour of a united Ireland, acknowledged he had a “very clear view on where this should end up”, he also said the party “should not be pre-determining every aspect” of the conversation and was “not going to just speak to ourselves”.

Not everybody will engage either with us or with the Irish Government, but I don’t think it’s sensible not to engage

“That’s why we will engage people who have a long track record of being involved in bringing this place to the position it’s in, and we’ll also speak to - when I say speak to, we’ll give them ownership of it - young people, who I think have the biggest stake in all of this.”

The membership of these panels has not yet been finalised, but the SDLP leader said conversations were “under way” with “significant” individuals, and their names would be announced by the end of the summer.

Private conversations, he said, were also under way with people from different areas of unionism.

“It’s important those discussions are quiet at the moment and are allowed to be had in that space,” he said.

Asked if he was confident unionists would take part in the commission’s work, Mr Eastwood replied that “not everybody will engage either with us or with the Irish Government, but I don’t think it’s sensible not to engage”.

“I still think it would be strange, if after all we’ve come through, where we’ve built a peace process, we’ve built institutions where we can work together on every other issue, that we wouldn’t sit down and talk about this issue.”

The conversation around a united Ireland, the SDLP leader said, could not be led by Sinn Féin.

“They’re toxic to unionists and that’s the reality, and I think we have a responsibility to do a lot of the heavy lifting on it.”

Mr Eastwood, whose party is in partnership with Fianna Fáil and influenced the formation of the shared-island unit, said he believed it was now incumbent on the SDLP to “do the work” to contribute to the conversation on a shared island.

“Brexit on its own changes everything, but it’s not enough. We can’t force people into a changed constitutional position and hope they’re happy at the end, we have to take them with us.”