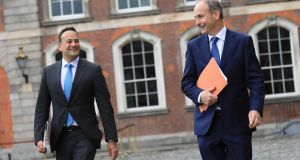 Taoiseach Micheál Martin, along with the leaders of the other Government parties, Leo Varadkar and Eamon Ryan, on Thursday announced the long-promised July stimulus package, including more than 50 individual measures “which collectively address every significant area of economic activity in our country”, Mr Martin said.

He outlined a series of business funding schemes, worker supports, tax cuts and capital investments totalling over €5 billion which will be rolled out over the coming months. The vast bulk, he said, would be pumped into the economy this year. Combined with in excess of €2 billion in loan guarantees, the total stimulus package amounts to some €7.4 billion, officials said. It is the largest cash injection into the Irish economy in history.

Mr Martin acknowledged that the package would be funded by “a major increase in our public borrowing”.

“It is our assessment that this is proportionate and necessary for a range of economic and budgetary reasons,” he said. “The increased borrowing which we are announcing today is in line with what is happening in Europe and internationally. A combination of lower financing costs, the major EU reforms implemented over the last decade, and the shared nature of the stimulus spending means that this extra borrowing is sustainable.”

Mr Martin said that many of the measures were designed to help individual businesses stay going during the pandemic, and to help them recover once it has passed.

“The critical issue of tight cash flows which is threatening many businesses will be addressed through measures such as changes to the payment of key taxes and the provision of low-cost financing,” he said.

Mr Martin said that capital funding would be provided to every school to assist with refurbishment, including renovations needed to help schools reopen during the pandemic. He said that there would be support for new town and village renewal schemes.

There would be additional money for “the national retrofitting programme, peatland restoration and improved public transport” which he said would “create jobs and help in addressing urgent environmental goals”.

The Tánaiste and Minister for Enterprise Leo Varadkar said that the package was “bigger in scale than most budgets and will be deployed at speed”.

“It is designed to help businesses to open, to help those that are already open to stay open, to get staff back to work and for those who cannot go back to their old jobs, there are new opportunities,” he said.

He paid tribute to business owners, who he said have “shown remarkable grit, determination and adaptability in the face of unprecedented challenges”.

Green Party leader Eamon Ryan said the Government is investing in funds for more walking and cycling facilities and rural greenways to allow people to “connect to nature in a better way”.

He said he would be asking all the local authorities in the coming days and weeks to “seize the moment and bid for some of these funds and the jobs they will bring”.

He also said there would be upgrades to national parks, nature reserves and heritage and tourism sites. A retrofitting programme would be undertaken, he said, which will be “labour-intensive work . . . sending a strong signal that it is time to start hiring and training workers in this sector.”

He said it would be a “practical example of the huge change we will be making as we meet our climate goals”.