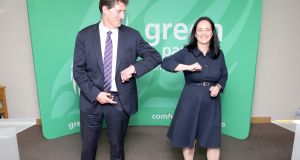 Green Party leader Eamon Ryan has won a surprisingly close leadership contest against Catherine Martin, seeing off the challenge of his deputy leader by a margin of less than 50 votes.

The narrow margin of victory took both candidates and their supporters by surprise and will pose questions about the durability of Mr Ryan’s leadership. It also reflects divisions in the party.

Split The result reflected the split that emerged in the party over entering government and Mr Ryan’s style of leadership. Party sources said Ms Martin received more votes from Northern members, most of whom did not vote in the poll on government.

At a press conference, Mr Ryan addressed perceptions he was malleable to other party leaders by saying: “I can play hardball too.”

He said the really close result “could have gone either way. I will reflect on that.”

Ms Martin pledged to support Mr Ryan’s leadership, asking people to “stick to Eamon” as the leader and to “stick” to the party.